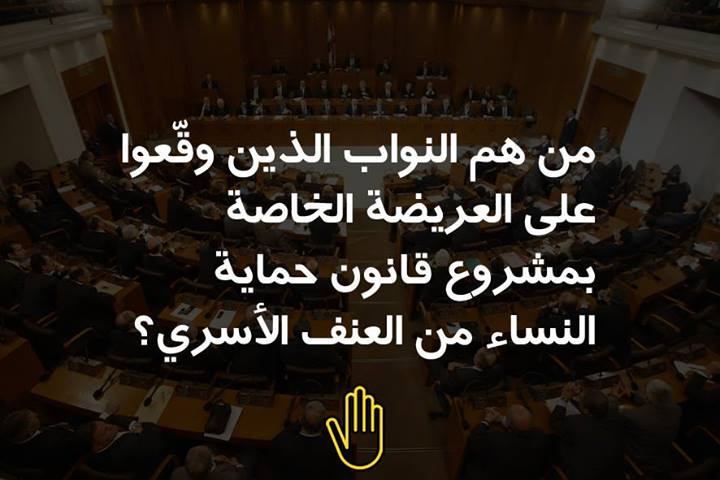 A lot of Lebanese have been sharing in the past few days the list of MPs who signed the draft to Protect Women From Domestic Violence back in 2012 as shown on the Kafa website, and some have been falsely attacking the MPs who did not sign the draft law, mainly Nayla Tueni for being the only woman who didn’t sign. Not that I support or like Nayla Tueni or any of the MPs, but these are false allegations for two simple reasons that were stated by the NGO Kafa:

– The law was never put to vote in the parliament and was only discussed in the parliamentary committees.
– The online petition includes the names of the MPs who supported the amendments suggested by KAFA to the draft law in question and not the law itself. Moreover, the petition did not reach all the MPs as the campaign stopped due to the political crisis that paralyzed the parliament.

So don’t go all crazy on the MPs not on that list because it doesn’t mean anything. Nevertheless, it’s good to see this law being brought back to light as we need to put an end to crimes committed by men against their wives like the ones that took place last week.

Having said that, a demonstration is being organized by Kafa on March 8 from 2 to 3 pm to condemn violence against women and ask for the Domestic Violence law to be approved and implemented.