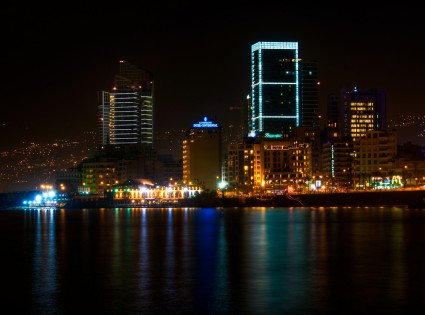 According to the report, Amer Hazime lived in the Platinum Tower in Beirut ( Tallest building on the right of the picture)

I got this link today from a reader. It’s a report about a certain Lebanese businessman called Amer Hazime who’s been ripping off people by pretending to invest in gold and stocks. Ripoff Report is a worldwide consumer reporting Web site and publication, by consumers, for consumers, to file and document complaints about companies or individuals. There’s no guarantee that the reports are authentic or accurate, but while looking for his name online, I found his mention in a 2008 article:

“Poor Lebanon” is a much-loved preface to a litany of the country’s troubles. Parliament has been deadlocked for a year. A quarter of cabinet ministers are boycotting meetings. There’s been no president since November because quarreling lawmakers keep postponing a session to elect a replacement. In Beirut so far this year, 17 people have been killed and dozens wounded in car bombs, army gunfire on protesters and clashes between pro- and antigovernment groups. In south Lebanon, many fear new battles could erupt with Israel. It sounds like a disaster about to happen in a nation where a renewal of the devastating 1970s-’80s civil war is a chronic worry. But Amer Hazime doesn’t see it that way. While not exactly optimistic about the future, the young businessman – a Lebanese-Jordanian dual national – is shopping for an apartment in Beirut where he can live with his wife and daughter. “The security situation is deteriorating, the political situation is bad but I am looking to buy a flat. My wife is Lebanese and I want to live here,” Hazime said as he ate pizza one night at a crowded Italian restaurant in Beirut.

If the accusations are correct, I truly hope then that there’s only one Hazime.

On Feb 21, 2013, news got out in Lebanon that Amer Hazime, a well-known and rich business man living in Beirut has stolen millions of dollars from his friends and acquaintances, then ran away to Jordan or Europe (last seen in Paris, France)

He has stolen the money under the pretense that he is investing it in gold and stocks. He made a lot of money when gold prices were very high, but then continued to take money and invest it even though he was losing on ever transaction.

The reason why people trusted him is because he was always seen in expensive cars, living in expensive homes (last residence: Platinum Building in Downtown Beirut) and wearing expensive watches. His unsuspecting victims saw that he was making a huge profit and starting throwing their money at him without any legal contract / documentation.

If you are a victim of Amer Hazime, then please speak out and file a law suite so that justice can be served. Respond to the rip off report and make yourself heard. He is a home-wrecker and ruined the lives and reputations of everyone around him (including his family, who have fled Lebanon to Jordan)

If you ever come into contact with this person, do not trust him because he is a con artist. He goes around pretending that he is a pious Muslim, but in fact he is no such thing! If he were a real Muslim he would not be gambling and stealing! [RipoffReport]