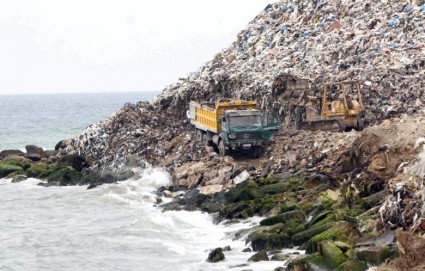 I am glad they finally decided to do something about this dump. It’s almost as bad as the Bourj Hammoud one and is getting worse every day.

Hello, Lebanon. It’s me, your friendly Green Patriot. Do you remember our mountain-like dump of garbage in Saida? The one that is over 50 meters high? You know, the one that looks like this?

Well, I have some news for you. The government has finally approved step one to start the dump’s rehabilitation, which involves the construction of a maritime barrier to separate the dump from the sea and making the Sinnik waste management plant operational. In addition, there will be a detailed study as to the current state of the dump, how to stop the use of this land as a dumpsite, how to deal with the existing waste, and identify the sites to which the waste will be sent to be processed. Great! The garbage will finally be processed and the site will be rehabilitated!

However, there are some down sides to this plan. In the long run, the plan will involve filling in a total of 63 hectares of the sea with land (18 in the first stage, 45 in the second), and the land that will be “created” by filling in this part of the sea will be used to either build a new port for the city, a public garden for the municipality or commercial institutions. Granted, the second part of the plan has yet to be approved, but even at the first stage, 18 hectares of our sea is destined to be filled with soil in order to be turned into land.

This is how the dumbsite should look like in the future but we all remember how Bourj Hammoud was supposed to look like years ago and is still the same.