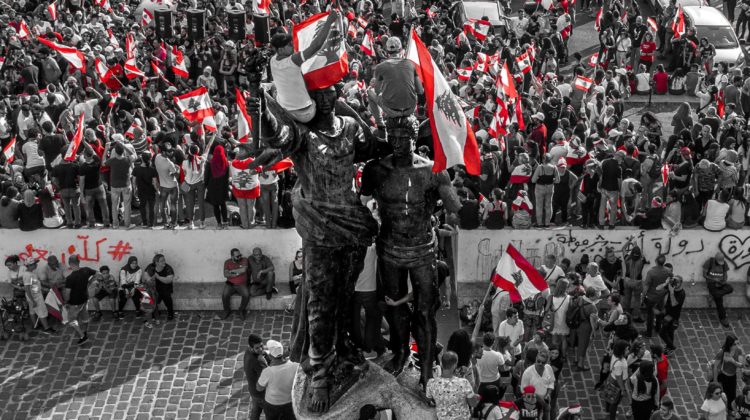 Today marks the 40th day since the Revolution started and from the looks of it, things aren’t going to cool down anytime soon especially when there’s no government in sight. On one hand, protests on the street haven’t lost their momentum and are evolving by the day; last week’s Civil Parade is a clear proof of that. On the other hand, those in power are split into three groups: those laying low, those relentlessly trying to lay blame on the revolution and those trying to ride the Revolution wave.

Before getting into what’s good, what’s bad and what’s ugly, let me clarify these key points:

– The October Revolution is unprecedented not only for its size and momentum but for its message of cross-sectarian unity.
– The economic crisis is what triggered the October Revolution, not the other way around.
– No one’s expecting to wipe out all the political parties overnight. The process might be long and painful but it’s needed.
– The October Revolution was never for the poor and deprived. If there’s anything that made it successful so far, it is because the government’s decisions drew in diverse crowds from all sects and classes. All honest & hard-working Lebanese are fed up with the situation and getting impacted by the corrupt ruling class.

The Good
– The cross-sectarian unitarian message is unprecedented and one that we must preserve at all cost.
– The amount of solidarity, creativity, resilience, passion that we’re seeing among protesters is heart-warming.
– All parties are feeling the pressure. They’re hesitant to hold press conferences, political rallies or even publish tweets.
– The role the Lebanese Army is playing has shown it’s one of the very few institutions we can still rely on. Only one or two major incidents took place in almost 40 days of protests now.
– The role expats have played in showing solidarity and supporting the revolution has been crucial. You make us all proud and your role in the coming weeks and months will be as important as before.
– The war against corruption has begun, even if not from the authorities’ side. Exposing corruption cases on TVs, filing lawsuits against politicians and billionaires, pressuring politicians to issue statements to deny every accusation (or at least try to), lifting bank secrecy, crossing the long-established red lines are all steps in the right direction.
– Parliament Paralysis by protests: Those who are betting on MPs doing the right thing are not getting yet the real issue is a lack of trust, and until we have a new government we could trust, there’s no reason for parliament members to pass laws, even suspicious ones. And no, you can’t let them vote and then protest against them, that’s not how things work.
– Protests in political “strongholds” are sending a clear message to all parties and leaders.
– Breaking the “fear” factor has helped people express themselves more and speak louder against ALL parties.
– A lot of politically affiliated Lebanese are starting to realize the need for inner reforms before anything else and this can be felt across social media platforms and TVs.

The Bad
– The economic crisis is worsening and time is against us. Businesses shutting down or declaring bankruptcies, salary cuts, cutting jobs etc. The crisis had begun way before the Revolution and those in power only made it worse in the past months.
– Businesses are running out of goods and this is starting to show in supermarkets, pharmacies and other shops.
– Parties trying to infiltrate protests, either to ride the wave or start fights, is causing further tensions on the street.
– The lack of dollars is causing an inflation in prices.
– The stubbornness of ruling political parties not to listen to the people’s demands is widening the gap between both groups. Claiming that the revolution should submit demands to those in power is a waste of time. Before a new government of competent people (technocrats, specialists, whatever you wanna name them) is place and an independent judiciary body is formed, no one has the right to ask anything from the people.
– The use of foul language and derogatory statements, even if I am against criminalizing it under any pretext, is not helping at times. Online bullying and attacks against (or by) TVs, media portals or online activists is also not helping.

The Ugly
– Capital controls are already in place and while businesses were the most hurt in recent weeks, people are starting to run out of money, and unable to withdraw any. This will only get worse in the weeks/months(?) to come.
– Risks of a new civil war, while minimal and insignificant in my opinion, are making more people anxious and it’s reviving ugly memories from the past, which is the last thing we need right now.
– Foreign funding allegations and conspiracy theories are dangerous diversions that some parties are playing on to undermine the people’s demands. There’s no doubt that foreign countries are always sticking their noses in our affairs but the only way to fight it is by uniting our ranks. Remember it’s not the US or Iran that stole our money and ruined the economy, it’s those in power.
– Civil disobedience: I’ve seen calls for a civil disobedience which means further escalations, which means this is not going to end anytime soon. It may be an ugly measure but one might argue that it is needed to trigger a real change.

– The negative role media is playing: I have yet to see one single TV station trying to bridge the gaps between both sides and build on the revolution momentum and changes done. While some are doing a much better job than biased and one-sided media, their role hasn’t been as constructive and positive as one would hope it would be.

All in all, I repeat: the revolution was never a revolution of the poor. It’s a movement that transcends the sectarian divisions and classes and unites the honest hard-working Lebanese against the corruption ruling class. Revolutions take months, years even and the change will be slow but imminent. This is impacting all of us, from those living in Lebanon, to those living abroad and worried about their parents and friends.

Things will get ugly if we don’t have a decent government soon, and people have the right to be worried and skeptical because it’s the normal thing to do. However, keep in mind that this collapse was happening with or without a revolution, and dollar scarcity was there before October 17. More importantly, if this revolution were to die out and things go back to “normal”, it will only be temporary fix before things turn out even worse. We have to stay hopeful, we have to be patient and we have to make those in power understand they MUST take action and QUICKLY! The revolution has to start from within every person, every party, every community because we all want what’s best for our country.

Parties are not getting extinct over night, sectarianism is not going to disappear, thugs are not going to vanish, but we have a golden chance to influence our surrounding, from family members to colleagues to acquaintances and friends and build bridges instead of burning them. Stay positive, stay hopeful and resilient.

I am starting to brainstorm ideas to support local businesses and families through online or on the ground campaigns with some close friends. As I said earlier, the role expats can play is a crucial one and we should stand as one in such times.