The Lebanese Association for Democratic Elections (LADE) launched a campaign a couple of weeks back to raise awareness on people’s demands by stamping the 1000 Lebanese Lira bills with slogans. I saw few pictures of the stamped bills and I am not sure I like the fact that they are defacing currencies. I know it’s for a good cause but I always hated people who write on bills and put stamps on them. 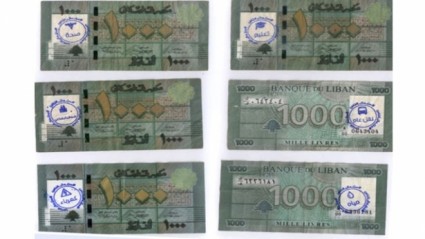 The same organization had launched a previous campaign asking Lebanese people to donate 1000 Lebanese Liras to the Lebanese MPs. I know it sounds hilarious and the way people reacted when asked to donate to politicians was priceless.