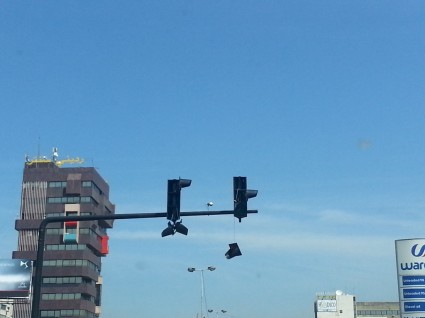 I am not sure how the author of this article found the traffic in Lebanon a “great” example of a self-organizing system and it honestly worries me that some entrepreneurs are considering adopting the same “chaotic” approach to encourage e-commerce and integrate it in the area.

In reality, traffic (among other things) in Lebanon is going from bad to worse and the way drivers are behaving is becoming unbearable. Few people respect traffic lights and road signs, speed radars are no longer working and the road conditions are worse than ever.

BEIRUT—The first thing that strikes you about the Lebanese capital is the traffic. As far as you can tell there appear to be few, if any, rules. Traffic lights appear at best advisory, lane markings—where they exist—are little more than decoration, and the concept of right of way is utterly foreign.

But despite that, it flows. It is a great example of a self-organizing system. Sure there are one or two badly-pranged cars, but Beirut’s drivers cram five cars into the space that would only fit two in Europe. So not only is the traffic self-organizing, it organizes itself in a more efficient way than other models. In fact citizens complain that the only time the traffic flow breaks down is when the police turn up to try to control it.

Like its traffic, the Middle East/North Africa (MENA) region appears to outsiders to lack structure, but perhaps it is just that it works in a different way. [WSJ]