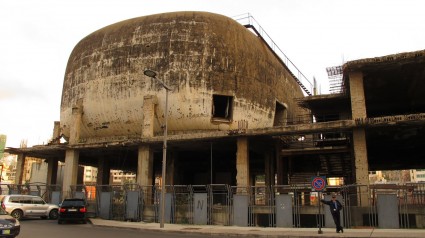 So “the Egg” is going to be demolished soon and a lot of bloggers seem to be pretty annoyed by this piece of news. To be honest, I think it should be destroyed for many reasons:

1- The building is very ugly and there’s nothing artistic about it, at least in my opinion. I don’t know why they even kept it while reconstructing Beirut in the 1990s.

2- Not every building that’s 50 years old and survived the war should be restored and preserved. Mustapha shares this thought with me.

Even though it’s a bit unrelated, there’s an important point needed to be said that the responsibility for restoring old houses or monuments should be on the Beirut municipality while in reality old houses owners are the ones baring all the expenses and unable to sell them because it’s part of the heritage.

Who gives a damn about heritage if it’s costing him all his money and the authorities don’t want to pay a penny?

For those of you who do not know about the Egg or Beirut City Center, it was designed by by Joseph Phillipe Karam, a prominent modernist Lebanese architect of the 60s to be a state of the art cinema in downtown Beirut.

Having said all that, I just read on the Daily Star that Solidere denied plans for taking down the Egg. Maybe it’s another rumor spread like the one about Messi being involved in a car accident.