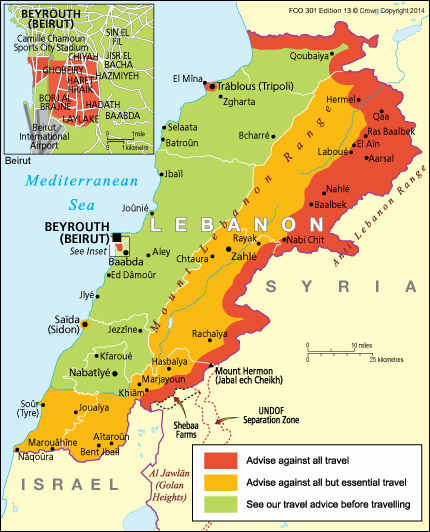 The security situation in parts of Lebanon can deteriorate quickly. There is potential for further violence, which could restrict departure options. The ability of the British government to provide assistance with departures may be limited. Keep up to date with developments, be vigilant, follow local advice and avoid any protests or demonstrations. Roads can become blocked due to protests. See Political situation

There is a high threat from terrorism. There is a high risk of attacks by Islamist extremist groups, which could be indiscriminate and affect Lebanese security authorities, checkpoints and places visited by foreigners like hotels, restaurants, tourist sites western-style shopping centres and supermarket chains.

Security authorities are at a high state of alert and conducting security operations across Lebanon. Suspects have detonated explosions to avoid arrest and attacks could take place in areas not previously targeted. If you notice that a security operation is underway you should immediately leave the area. [Source]