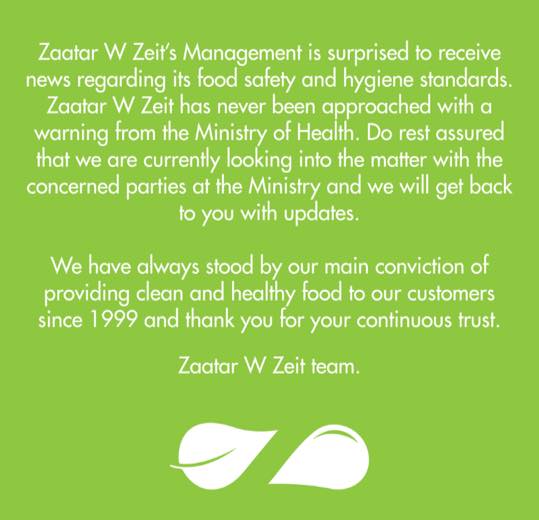 If I ask anyone about the food safety campaign that was kicked off few months ago, the only thing they will probably remember is the first list of restaurants that was announced by the Minister that included the likes of Roadster and Kababji surprisingly. Of course we still don’t know the nature of the violations at these restaurants, the standards applied to check these violations and if there’s any follow-up process.

I’ve been supporting this food safety campaign since day1 but I still don’t approve of the way the minister was flashing popular restaurant names in press conferences and causing serious damages to the businesses for reasons that are still unclear. Taanayel les Fermes for example got its share of bad publicity because most people mistook it for Centre Taanayel that was declared non-compliant.

Another example is what happened with Zaatar wou Zeit yesterday. I spotted an article early in the morning on Annahar saying that ZWZ received a warning from the ministry but I chose to ignore and check later on what ZWZ management had to say about it. As it turns out, they were unaware of any warnings addressed to them and they learned about it from the papers, which is quite absurd!

I traced back the article to the National News Agency but I couldn’t find anything on the MOH website. In fact, the latest health news there dates back to 2012.

All in all, sharing such articles can be seriously damaging and misleading and I think the MOH should investigate and make sure nothing is ever published without their consent. If there’s really a warning, we all deserve to know the whole story especially when the food chain in question is a very popular one. 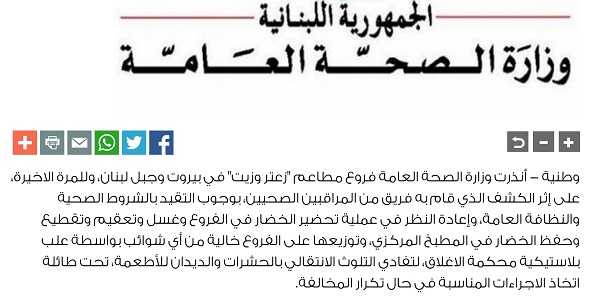