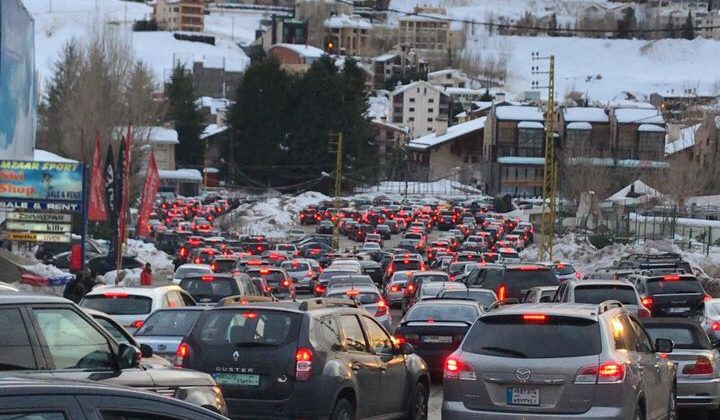 Whether I’m planning to go ski, take my kid to play with the snow or go out with the family to have lunch, Kfardebian & Mzaar are always last on my list. I love it up there, the resorts are the best there is, the restaurants and hotels are great, but the traffic, the shitty roads, the lack of police and parking places keep me from heading there every time.

Yesterday was even worse than usual, as ski season has been dead this year and everyone rushed to enjoy a bit of skiing and snow before it all melts, and as usual it was hell on the way up and down. Those who went in buses were forced to spot some 20 KM away from the slopes while others struggle to find a spot in the hugely Mal-organized and overly priced Mzaar parking lot. All the lanes were blocked on the way down (as usual) and it took some people around 3 hours to reach Jeita.

Who is to blame? Mzaar shared a video asking where the authorities were but then removed it. The truth is both are to blame as this has been ongoing for years now and there are tons of ways to organize this fiasco. There will always be traffic but what’s happening on weekends was beyond normal traffic.

Is it worth it? Definitely not. Unless you can afford to book a hotel for the weekend and take Monday off, there’s no point of going to Mzaar to ski or enjoy the snow on Saturdays or worse on Sundays. Also, it’s not worth your money because the slopes are usually super packed and there’s a long wait at the ski lifts. Going on week days is better but I’d rather head to the Cedars to be honest as it’s more beautiful and less crowded up there.