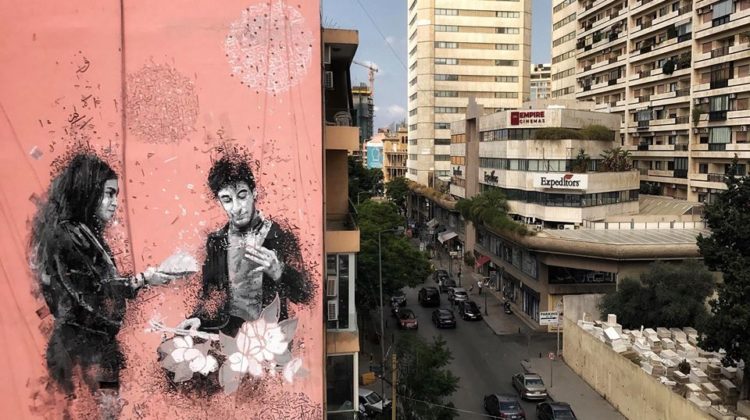 Yazan strikes again, this time with a beautiful mural painted on building previously destroyed by the Civil War located on Beirut’s Greenline – the former frontline of the Civil War splitting Beirut into the Christian East and the Muslim West. The mural depicts a scene from Ziad Doueiri’s classic West Beirut movie where Tarek Noueiri, a Muslim kid is sharing cotton candy with May, a Christian girl whose family took refuge in West Beirut.

The mural is a reminder of Lebanon’s post-war settlement: a political system built on sectarianism and business interest that blocks true national cohesion. The persistence of the current political class in fueling sectarian grievances and obstructing the rule of law reflects in the ever-growing government debt, absence of basic services and limited civil rights. Case in point, 27 years after the end of the Civil War, with the absence of civil marriage Tarek and May would not be able to get married if their story had continued (…in the way I imagine).