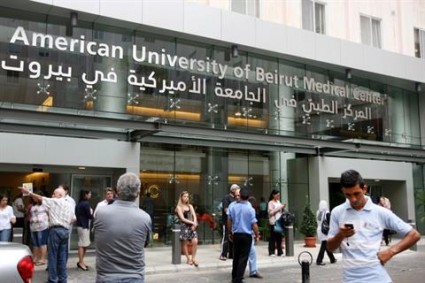 I hope Nasr and her fellow researchers will be given the proper resources to go all the way with their experiment and maybe achieve a breakthrough in the fight against Leukemia.

BEIRUT: Scientists in Lebanon have developed a drug cocktail that they hope could cure a rare form of leukemia, in a milestone for cancer research in the region.

The drug combination targets Chronic Myeloid Leukemia (CML), a blood cancer that affects 1 in 100,000 people in Lebanon but whose prevalence is rising as patients use expensive drugs to live longer with the symptoms.
“I’m not from a rich family, I have sick people in my family and understand how it is important to have the money,” said Rihab Nasr, assistant professor of medicine in the Department of Anatomy, Cell Biology and Physiological Sciences at AUB and the project’s leader. “I wanted to find a treatment that cures.”

Both interferon and arsenic are used separately for cancer treatment. Arsenic is a toxin, but can be used in cancer treatment and may be instrumental in degrading the proteins that are central to cancer stem cell growth.

Nasr first tried the combination on cancer cell cultures that were collected from patients and kept alive in incubators in the lab, some of which were resistant to the current treatments.

The drug cocktail worked, and so Nasr moved on to try it on mice.

First, the scientists injected the mice with cells infected with a DNA fragment that carries a specific “oncogene,” which is a gene that can transform into a cancer cell that causes CML.

The mice developed leukemia within a few weeks. Then they were treated with the drug.

“And it worked,” Nasr said.

But to make sure the treatment was targeting the cancer stem cells that can multiply and renew the cancer, Nasr took the experiment one step further. She took samples from the bone marrow of the treated mice, where the cancer stem cells would have remained if they were not eradicated, and injected them into a second set of mice.

Most of the mice that received the treated bone marrow did not develop the cancer, and lived on to die essentially of old age. “This tells me that the combination of arsenic and interferon is eradicating this small population of cancer stem cells,” she said.

Nasr and her fellow researchers will now look into why the interferon and arsenic combination works on the leukemia cells, a process that is not fully understood. [Full Article]