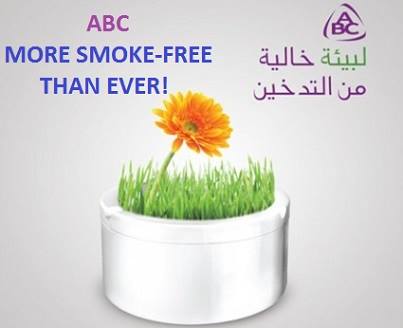 People were complaining earlier online that they spotted some people smoking indoors at ABC Achrafieh and that the mall is breaking the smoking bank law. It didn’t take long for ABC’s owner Robert Fadel to contact the concerned people and state that “he gave extremely strict directives for smoking to be absolutely banned in all indoor areas at ABC”.

That’s great news and thumbs up to ABC for responding that quickly and in the best way possible.

For those of you who aren’t aware, ABC Achrafieh started breaking the smoking ban in indoor areas a few days ago despite being the first establishment to embrace the law before it was even passed. Ironically, ABC was at the same time raising awareness about breast cancer! Needless to say, many of you got enraged at the new status quo, and without us even spreading the news, you flooded ABC’s page with furious complaints.

And guess what? It worked!! MP Robert Fadel, owner of ABC, contacted us a few hours ago saying that as soon as he heard about the situation, he gave extremely strict directives for smoking to be absolutely banned in all indoor areas at ABC. Thank you Mr. Fadel for preserving a law you were a pioneer in adopting a few years ago.

Dear supporters of Law 174: in less than 24 hours, YOU made a company retract its decision just because YOU vehemently defended your right to breathe clean air that’s guaranteed by Law 174. In the process, YOU proved wrong those who claim the law is dead and nothing can be changed in Lebanon. The law is well and alive when there are people like YOU fighting for it!! So the next time you’re sitting at a restaurant or bar and people around you start smoking indoors, protest to the owner, protest on the venue’s Facebook page, and protest by calling 1735 to report the violation. Change will happen only if you fight for your rights and make your voice heard!

Mabrouk again and enjoy your smoke-free visits to ABC!