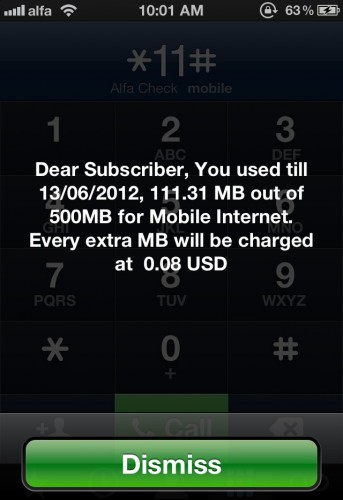 My 3G consumption as of today

Four days ago, I called Alfa to ask them about the 77Mbytes that I presumably consumed in the first 8 hours of my new cycle and I was told I only consumed 11Mbytes and I have to wait till the system resets.

I don’t have that many Apps on my iPhone, all push notifications and most location services are turned off, I use 3G only when I am out and rarely for updates so that’s just weird. Added to that, is 3G in Lebanon that fast to download 80 mbytes in half an hour?

Nevertheless, I can’t be sure that I did consume them or not, and I don’t know why Alfa misinformed me the first time, but to be on the safe side, I just downloaded a data usage monitoring app (DataUsage).