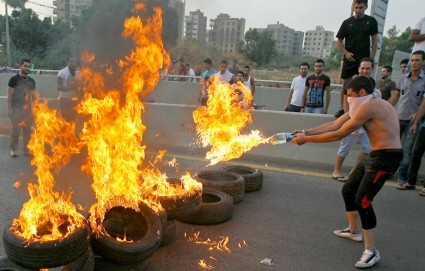 This is what Lebanon is turning into. Read and rejoice.

Today, as I have done in the last 150 weeks, stepped into a car and headed towards the airport to take my weekly flight. I, however, had no idea that this ride would be different in every possible way than any other airport ride I have been on.

Traffic was fabulous; we made it from my house to Beirut in less than 20 minutes, a ride that normally takes over 30, and I was getting anxious at the idea of arriving sooner than planned. As we were approaching the exit to the airport (around 2 km) we started observing cars traveling in the opposite direction. Hoping to satisfy our curiosity, we kept going until we reached an ocean of red stoplights accompanied by angry men and women puffing on their cigarettes and swerving their hands in agony and disgust. In the background, we could observe a thick dark smoke killing the life out of the few remaining trees and eternally marking their territories on the 50+ year old buildings that were brave enough to survive an Iliad of wars and attacks.

Upon having waited for 10 minutes with absolutely no result, I built up my 20 seconds of courage, stepped out of the car and decided to follow the few Lebanese that refused to give up their flight.

As I was enduring this walk cladded in a dark black suit while dragging my 10 kg (the maximum allowable weight for the plane) carry-on behind me in one hand and my suit bag in the other I noticed how Lebanese people take advantage of any shitty situation for their own benefit. It seems that while a cluster of individuals found it appropriate to burn tires and block the road to the airport others took this opportunity to awaken their half dead, rusty scooters and offer the frustrated travelers transportation services to and fro the airport, all this for a humble and modest price of 10$. This offer seemed so appropriate to them that rejection was accompanied by a series of insults involving your parents, siblings and even family members that passed away so long ago that you never expected to be mentioned again!

I refused this service several times from different â€œpatriotsâ€ (sorry great grandmother Alexandra, a certain guy called Alloush said he wants to do the nasty with you) and I am glad I did because I luckily understood why they called Lebanon a melting pot.

The cool â€˜Frenchiesâ€™: This type of people are ones that enjoy these situations for one and only reason: to talk and brag about it. This girl, who was walking next to me for a couple hundred meters, found it appropriate to call as many people as possible to share her experience with them. Sample quote: â€œCâ€™est tghooo dghooole, tu rateee ma Cherie!!!â€

The frustrated â€˜Frenchiesâ€™: They are the more down to Earth people that have a life which is too hectic that they refuse to loose time that way. Sample quote: â€œon vit dans un monde de merde. Les gens se demandent pourquoi on veut quitter ce pays et ne plus revenir. Ils sont fou !â€

The ones coming from the south: These are probably travelling for the first time and do not understand the concept of packing lightly. They travel in groups of at least double digits with members ranging from a couple days old to dead in a couple days. Sample quote: â€œAbou Aliiiiiii, 7kee ma3 2ebnak Hassoun el 2ered wou 2ello ma yetsaraf mete el shi3a ba2a!â€

Other conversations were going on at the same time but most of my brain power was dedicated to insulting the country and the people in it.

After having completed that 20 minute walk in the dreadful sun and mid-June heat, the airport staff found it in their heart to greet us with a warming, and useless, â€˜hamdella 3al salameâ€™ and eyes filled with so much pity that killing yourself with a plastic knife would be considered more humble.

I am writing this while sitting in the lounge at Rafic Hariri International Airport and wondering, as I take my last sip of whiskey, if I should be happy that my flight to Riyadh hasnâ€™t been cancelled yet.