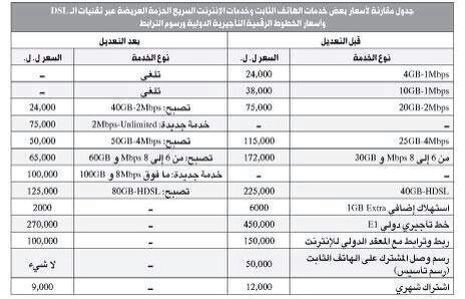 Note: Telecom Minister Boutros Harb did not confirm the below rates and said he will announce them officially on Friday 23rd of May.

The above table has been circulating around for the past couple of days after the Lebanese government approved a proposal to lower phone call rates and internet costs. This is NOT an official list as the Telecom Minister will be holding a Press Release soon but it seems logical and is much-needed upgrade from what we have right now.

To sum it up:
The DSL 1Mbps (4G and 10G), and the 2Mpbs (20GB) plans will be cancelled and replaced with the 2Mpbs (40GB) and priced at 24,000LL per month which was the lowest rate available. A new 2Mbps service (Unlimited) plan will be introduced and priced at 75,000LL monthly. Moreover the 4Mbps (25GB) will be upgraded to 50GB and its price slashed by more than 50% (From 115,000 LL to 50,000 LL per month). The 6 & 8Mbps plans will also get double the quotas at half the original pricing. Moving on to the HDSL, and I really hope this is true, we will get 80GB instead of 40GB at almost half the price (125,000 LL instead of 225,000 LL). There was no mention of the 3G plans after the last government session, but I heard we might get double the quotas at the same or a reduced price as well so let’s keep our fingers crossed.

While these are great news, there’s still a major problem for a lot of Lebanese outside Beirut as their phone lines don’t allow them to get more than a 1Mbps connection and won’t be able to benefit from these speeds. I still have this issue at my parents’ house in Jounieh and I am not sure if they’re working on fixing it or not.