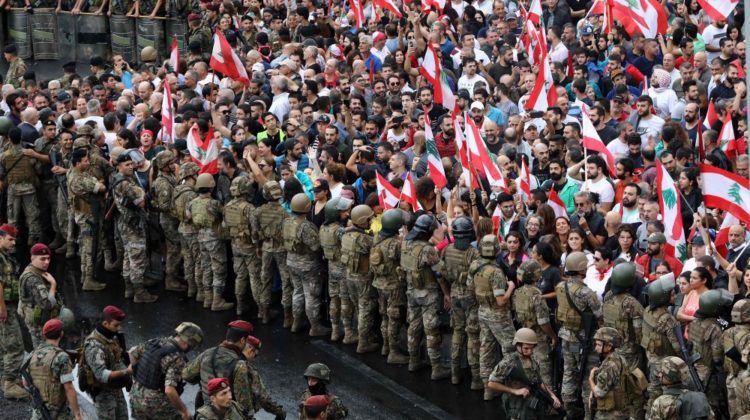 Going down to the streets is the only option that has proven to be efficient since October 17, 2019. Just looking back at how the authorities, from the president to the current parliament and new government, have handled every single problematic issue shows that all should go down, and that #KellounYa3neKelloun was and is still a spot-on slogan!

If you memory has failed you, here are few reminders:

– They brought a new government that claims to be independent, but we hear everyday political parties threatening to withdraw from it.
– New PM Hassan Diab claims he achieved 97% of what he promised in the first 100 days, which is a bigger joke than the book he released as an ex-minister.
– Interior Minister somehow founds a link between COVID-19 and Israel, and keeps threatening protesters or those involved in violent clashes (except for Berri’s guards of course).
– Health Minister thinks he’s better than all of us, talking at people and publishing patronizing tweets while he can’t wear a mask properly.
– Economy Minister is all over the place.
– Finance Minister is helpless, and IMF negotiations is a clear proof of that. There’s a 66 billion dollars difference in losses reported between the Central Bank & the Parliamentary committee.
– Justice Minister has been postponing signing off key judiciary appointments for months now.
– Information Minister wants more censorship and control on media.

Should I keep going?

How many corruption files were brought forward since last October? What happened to the illegally employed in the public sector? What happened to the billions transferred prior to the Revolution? To the fraudulent oil case? To the bribes at Beirut’s Port? Or Questionable auctions by Customs Director? What about the illegal crossings that no one wants to shut down? The Zaitunay bay and other maritime illegal takeovers? The Telecom scandal? The waste of public funds in ministries and by Beirut’s municipality?

Out of all these issues, the only one they’re fighting over is an amnesty law! Talk about priorities.

On another note, and in response to those telling those going down what they should be protesting with or against, that’s none of your business! If people want early parliamentary elections, an independent judiciary body, or are not happy with having another armed faction in the country influencing every single decision being taken, then it’s their right to do so. If you disagree, feel free to protest too, no one’s stopping you.

Going down tomorrow is not optional, just like The Revolution is no longer a point of view. It’s here to stay until real change happens, until governments are toppled, parliaments are changed. Nothing is happening overnight, we all know it’s baby steps but those in power will try to weaken and destroy every protest in any way possible. COVID-19 helped them a lot, now they will resort, like they always did, to sectarianism, violence and the “if you’re not with us, you’re serving Israel” logic.

All in all, The Revolution is not perfect, and there are valid remarks that should be taken into consideration, but I’d take whoever has been going down for months to righteously and peacefully ask for his most basic rights over anyone in power right now.