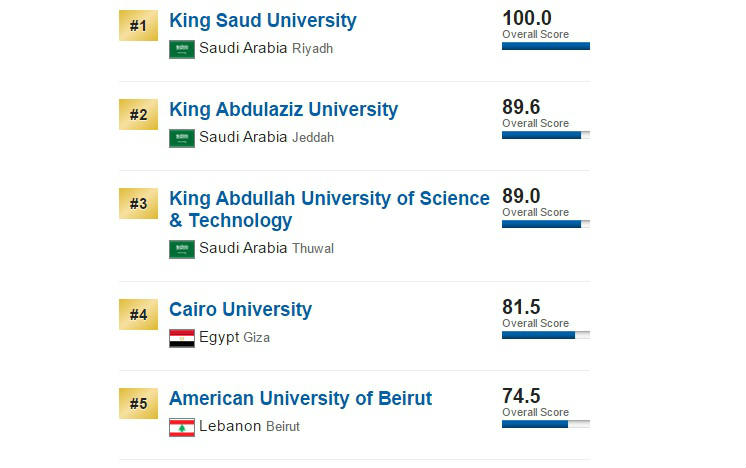 You can check out the full list [Here] and the methodology followed [here].

The inaugural U.S. News Best Arab Region Universities rankings are the first in-depth assessment of schools in the region. This 1.0 version of the rankings is the beginning of a long-term project to develop surveys and rankings for the region.

U.S. News believes that the 2015 Best Arab Region Universities rankings will allow prospective students, parents, policymakers and employers in the region to accurately compare institutions – something that had not been possible in the past due to a lack of standardized educational data. Arab region universities will also be able to use these rankings as a way to benchmark themselves against schools in their own country and region and discover top schools from other countries to collaborate with.

The rankings – which are based on bibilometric data and research metrics provided by Scopus, part of the Elsevier Research Intelligence portfolio – focus specifically on institutions’ academic research output and performance and not their separate undergraduate or graduate programs.

See Also:Can You Live With 11,000LL for 5 days? Three AUB Students Are Taking The Live Below The Line Challenge
Posted By Najib
Categories INFORMATION,LEBANON,MIDDLE EAST