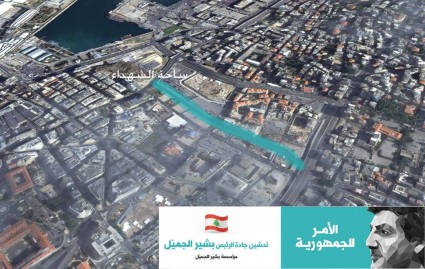 It’s good to see notable Lebanese getting streets named after them. The ones mentioned in DailyStar’s article include Poet and Writer Said Akl, who turned 101 a month ago, Dr.Abdel-Ghani Mikati, as well as Anis Tabbara and Mohammad Moussali.

The article also mentioned we will have two new hotels in Beirut, which is pretty weird considering the lousy performance of hotels for the past couple of years due to the economy and bad touristic seasons.

BEIRUT: The Beirut Municipal Council has approved the naming of several streets in the city of Beirut after notable Lebanese figures.

Street number 77 in the greater Beirut area of Sioufi will be renamed after the poet and writer Said Akl, the council said in a statement issued Friday.

The council also approved naming Street 83 in Ras al-Nabaa after Abdel-Ghani Mikati, a doctor, and a section of Street 54 in the neighborhood of Sanayeh and Street 73 after Beirut notables Anis Tabbara and Mohammad Mousali, respectively.

Separately, the council approved the establishment of a hotel in Abdel-Wahab al-Inglizi Street in Ashrafieh and another on Australia Street in Ras Beirut. [Link]