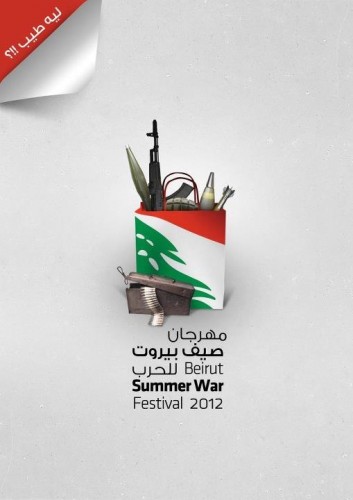 June 1st: Opening Ceremony
Fireworks, gunfire using various assault rifles (M16, AK47 etc…) and a synchronized RPG show will be performed by the Bin Laden Revolutionary band. Two cars will be exploded at the end of the show.

June 2nd: Head Shot Contest
Sniper rifles will be distributed to 100 participants along with a map of Beirut containing 150 selected roof tops. The participant with the highest number of headshot casualties wins. No killing of animals will be allowed, only humans.

June 3rd: Bus Racing
This event will be sponsored by the Reviving the Lebanese Civil War Association and funded by the Friends of Lebanon International Organization. The game is simple: 5 buses will start the race at different locations in Beirut and will be asked to pick up civilians at designated checkpoints around the city. Once the busses get filled up they will then have to get past Ain el Remmaneh without getting shot at. The bus with the least amount civilian casualties wins.

June 4th: Death Race – Beirut Edition
Death Race movie director Paul W.S. Anderson and actor Jason Statham will be the proud guests of this event where various heavily armed cars will race in the streets of Beirut. All types of weapons will be allowed and road-side bombs will be planted at various undisclosed locations. A Tripoli-Halba edition will follow at a later stage.

June 5th: Tire Burning
Michelin and the F1 official tire supplier Pirelli will be the sponsors of this new and innovative game. 25 Lebanese drivers with a â€œZouzou Ebbaâ€ profile will have to race their way through Beirut streets while a large group of volunteers will try to block the roads with tires. Once the tires are set on fire, the road will be considered as closed and the driver will have to find an alternative route to the finish line. Hit and runs will be allowed.

June 6th: Closing Ceremony
A group of suicide bombers will entertain the crowds on the closing day and one of them will be performing his act live. This is a must-see event as he will only be able to perform it once. Artillery shots and synchronized car bombings will follow to mark the end of the Beirut War Games 2012 edition.