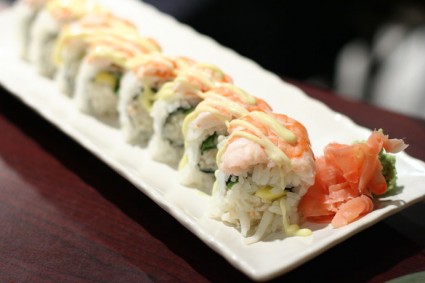 I was not very fond of sushi until two years back, but since then i’ve tried almost every place in town and i must say it is very hard to tell if one place is that much better than another. One thing is for sure is that sushi is very expensive in Lebanon.

Sushi restaurants are divided into two categories in Lebanon:
– The classy and expensive ones (WokWok, Salmontini, Ybar, Le Sushi bar, and to a certain extent Le Yen and Maki.)

Most of the expensive places are good but it’s way too overpriced. WokWok has the most uncomfortable chairs too. Maki is a great place too but as Michelle pointed out earlier, it’s a very complex menu which i found annoying. Le Yen on the other hand is one of my favourite places.

As for the less expensive places, Oceanus is the most highly recommended by most people i know.

All my friends who come from abroad tell me sushi is way too expensive here and not that good. But all food is relatively expensive in Lebanon specially the non-Lebanese one, so that’s not something new. As for being not that good, i can’t be the judge of that but i don’t find it that hard to believe. Afterall, we do import most of our sushi and the food control here is “laisse a desirer”.