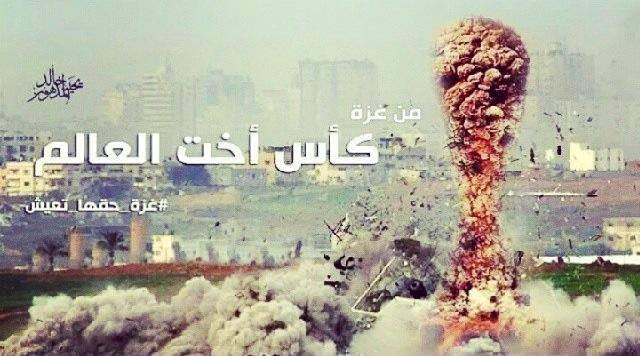 Ever since Israel started its offensive against Gaza few days ago, a lot of people have been showing their support for the Palestinian people while some of them have been bashing football fans for not caring enough about Gaza and cheering for their teams. “How could you watch the World Cup while children are dying?” and “Shame on you for ignoring the massacres on Palestine” are some of the messages I got and I couldn’t but laugh at them.

We all condemn what’s happening in Gaza and what’s been happening for the past 30 years, as we condemn the hundreds of innocent civilians killed in the Syrian conflict everyday, and in Iraq and Yemen and anywhere there’s a conflict. However, as much as some Lebanese and Arabs feel concerned with what’s happening in neighboring countries, there’s nothing we can do to help even if we wanted to, and the truth is we need help in Lebanon more than any other country (except Palestine maybe). Moreover, if you truly wish to help Palestinians, do so on a daily basis and don’t just remember them during wars and start spreading pictures of dead babies and burned bodies on Facebook.

Going back few months from now, innocent people were dying in Tripoli (In Lebanon of course) due to sectarian fights yet a lot of people who are sharing Gaza posts and pictures all over the internet didn’t feel that concerned with what’s happening. A lot of Lebanese as well don’t feel concerned with the suicide bombings in Dahieh and Beirut’s suburbs, without forgetting the 1 Million+ Syrian refugees suffering in Lebanon.

To sum things up, stop pretending to care about Gaza children if you’ve just realized that they are suffering, stop telling people not to watch the World Cup because people are dying in Palestine and stop sharing graphic images to get people’s attention. If anything, start caring about your country more and let people enjoy their lives the way they see it appropriate.