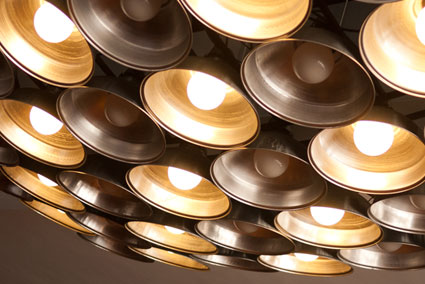 I love burgers and I love apple pies which is why I was excited to pass by Cow & Apple in Hamra today. It wasn’t hard finding the place since they’re located right in front of Crepaway so I didn’t get lost although I was expecting to. The place is located inside the entrance of a building and it’s pretty spacious with a bit of a school cafeteria meets burger joint look going for it. I thought the benches were pretty tight and claustrophobic but I really liked their lights and the menu scribbled on the kitchen window.

I got the menu and went through it and kinda got lost so I asked the waiter which burger was popular and he told me the #5 which included cheese, mayo, grilled onions, home made bbq sauce, lettuce, mustard and a 250 gram beef patty. He asked me if I wanted it cooked medium or well done, I chose medium. 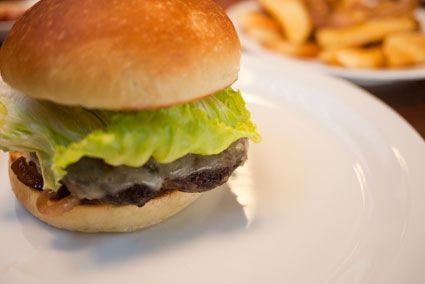 The burger took around 15 to 20 minutes to arrive and I thought the presentation was good. The bun looked delicious and the patty was pretty thick so I couldn’t wait to devour it. I took my first bite and realized my burger was more well done than medium which was disappointing. Why do places bother to ask you how you want your burger if they’re going to cook it their way? The bun as I had assumed was really good, it managed to soak up the bbq and mayo/mustard sauce without getting soaked and it also had a slightly sweet flavor to it. The beef patty definitely wasn’t as good as Brgr Co nor as juicy but it was better than the very thin patty I had at CBJ two days back.

Now there is a slight twist with the ending since I ran into a bit of an issue with my burger. I was around 80% through my burger when I spotted what looked like a small hair. I decided to pull it out with my fork when I realized the small hair was actually not that small so I called the waiter and the manager came as well. They apologized and offered to make me another burger but I told them not to since I already had eaten practically all of it and I was pretty full. They told me then they wouldn’t charge me for it which I also refused since mistakes do happen and an apology was all I needed. They then insisted dessert would be on the house which I thought was ok since I wanted to try their apple pie anyway. I kinda felt bad for them since from all the people that could have gotten a hair in the burger it had to be me while I’m on my burger quest!

Over all though I was kinda disappointed and not because I found a hair in my burger but because I was expecting their burger to be better than this. If you’re in the neighborhood it’s not a bad burger to have but it’s not one I would crave or one that’s worth getting stuck in traffic for. One thing I think local burger joints should invest in is a good meat thermometer. Seriously if you can’t get that right then you should really hire a new cook.