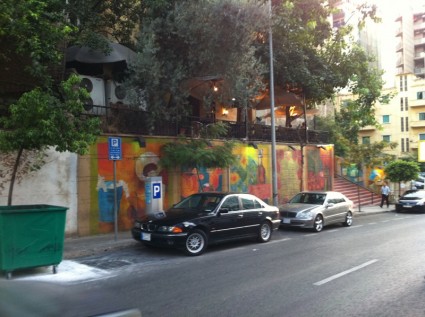 It looks like Valet Parking guys are after me these days. After my dispute with Zaatar W Zeit Kaslik’s valet, it is now Schtroumpf Achrafieh valet’s turn.

I was leaving work two days ago around 6 heading towards Jeitawi hospital in Achrafieh and decided to stop by La Cigale to buy something. I parked my car as shown in the picture, as it’s past 5 and park meter is off.

As I was stepping down from my car, the valet guy shows up asking me for my keys. I told him that’s a valid parking spot and I don’t need him to park my car. He tells me this spot is for the restaurant (Schtroumpf Achrafieh) and they paid the municipality to have it after park meter hours are done.

Having heard that, I asked him to call the restaurant’s manager, so he hesitated and was like you have to go see him yourself so I went up and asked Schtroumpf Achrafieh’s manager if the valet’s story is true.

Turns out it’s a big fat lie and they only request politely for cars not to park in the two spots in front of the restaurant. Afterwards, I asked Schtroumpf’s manager, who was very polite and apologized for the incident, to go talk to the scumbag valet they got and ask him to stop harassing people.

All in all, I am happy the manager talked to the valet instantly and I urge all the blog readers to do the same thing as I did and not just give away their cars.