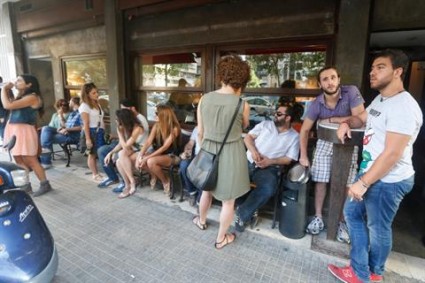 I don’t know whether it was a publicity stunt that DePrague’s owner pulled by changing his mind after having decided to close down his pub, but the reasons for closure and re-opening it are not valid specially the ones linked to the smoking ban and a change of atmosphere in Hamra. If anything, Hamra changed in favor of DePrague (and others) and became a street packed with pubs and nights, therefore attracting more potential customers.

Kayan opened in Gemmayze even before DePrague and is still packed every day of the week despite the smoke ban.

Owner Raed Habib decided to close his doors, with several culprits sharing the blame: a year of declining revenue due to an economic recession, an increase in unrest in Lebanon and the region, and a rise of reported incidents of violence in Hamra, a smoking ban that appears to be selectively enforced in the country and a general change of atmosphere in the neighborhood. [Link]

“There was so much pressure. I couldn’t ignore it,” said Raed Habib, who opened De Prague in 2005, making it one of the first establishments in Hamra to attract a popular following after the civil war. So dedicated were the staff and customers that they organized a sit-in at the restaurant Wednesday evening and then walked to the house of Habib to convince him to change his mind.

“If so many people genuinely want the place to stay open then let us give it a chance,” Habib said Thursday morning after a steady stream of patrons visited his home late Wednesday until after midnight. [Link]