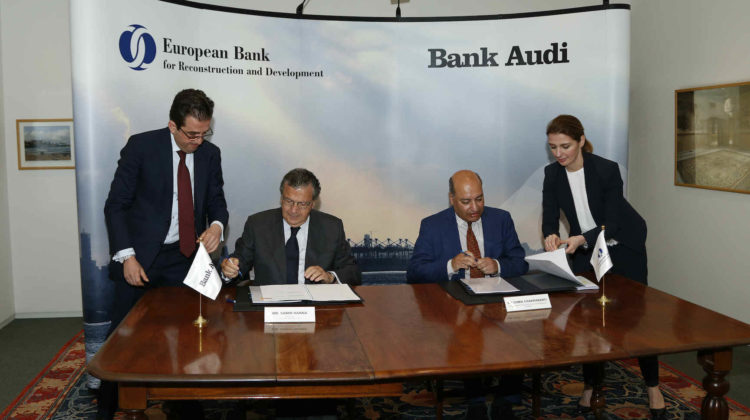 These days, most of the news surrounding Lebanon’s economy and financial sector are dire warnings for a Greece-like meltdown in Lebanon, the world’s third most indebted country. This is why the European Bank for Reconstruction and Development (EBRD) announcement this afternoon is so significant. The EBRD acquired 2.51% of Bank Audi’s total common shares. This is the first ever equity investment by the EBRD in the southern and eastern Mediterranean (SEMED) region. This demonstrates a confidence in Lebanon’s financial sector, where a European investment bank is acquiring shares in a major Lebanese bank, signaling they have confidence in a return on investment despite the otherwise grim economic outlook in Lebanon.

For those who are not familiar with the EBRD, it is a multilateral bank founded in 1991 and committed to the development of market-oriented economies and the promotion of private and entrepreneurial initiative in more than 38 economies. The aim from its investments is to make the countries more competitive, better governed, greener, more inclusive, more resilient and more integrated. Lebanon became an EBRD economy of operations in September 2017 joining the Bank’s southern and eastern Mediterranean (SEMED) region where EBRD has invested over €6.5 billion in 170 projects.

With the Rome II conference kicking off today, Paris IV donor conference for Lebanon set for April 6, reassurances from the Central Bank Governor Riad Salameh and now EBRD’s move, we can only hope that Lebanon’s economy is on path to recovery, assuming of course that the authorities will commit to the much-needed reforms and cut down on corruption and theft.