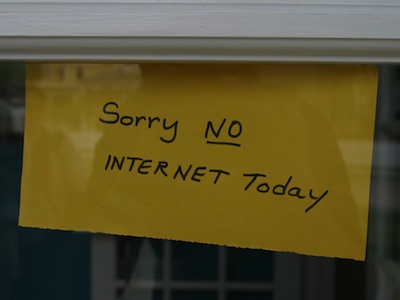 The internet outage Lebanon is going through at the moment is the worst in years as it is nearing the 24 hours mark. The cost of downtime is hard to estimate as there are many parties involved and no decent reports on that matter, however it is possible to have a near estimate by using the available statistics and numbers.

We need to add to that the number of credit/debit cards online authorizations. Knowing that there are around 2 Million cards in Lebanon (given the yearly growth) with a yearly spending of almost 9 billion dollars (Byblos Economic Report 2011), letâ€™s say 5% of the total transactions are online, which gives us 5% * $9Billion = 450 million dollars per year.

Assuming there are many additional factors that are internet-related, letâ€™s add an extra 2 or 3 million dollars which gives us 7 million dollars lost in one day of internet downtime. To be honest, I thought the number would come out much bigger than 7M but again this is not a scientific or economic study. Nevertheless, I strongly doubt that it would be less than 5 million per day.

On the other hand, what I am sure of is that we only need $10 million dollars to setup a backup line and avoid what has happened in the past three days.

NB: As I stated in the post earlier, my estimate was based on general knowledge, common sense and few numbers and stats and is NOT a reliable economic study. Corrections are more than welcome.