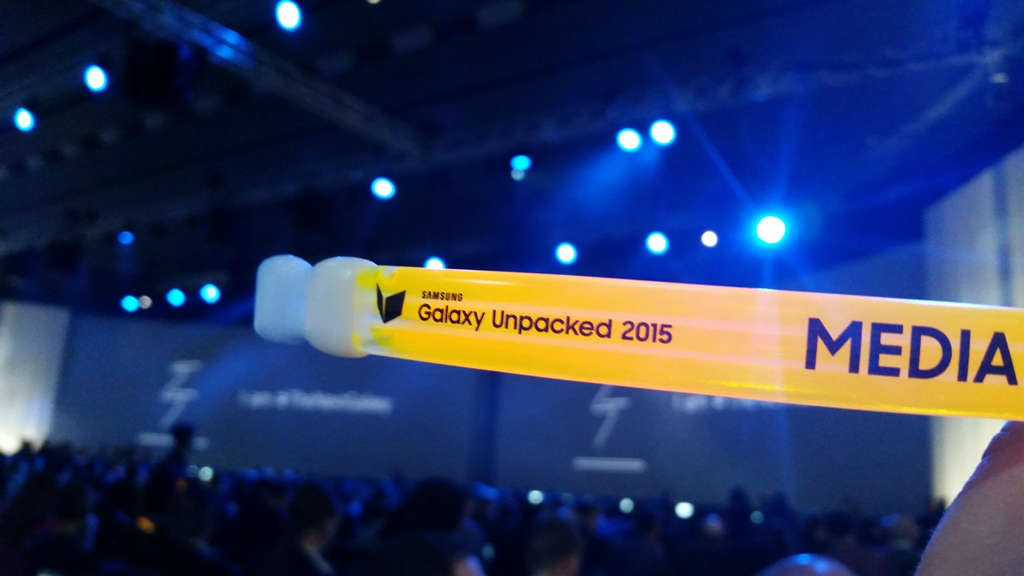 Yesterday was the first time I attend a Samsung #Unpacked event and I personally enjoyed it. The event took place at the Centre de Convencions Internacional in Barcelona and it felt really good to take part in it, share the excitement and interact with the crowds. #Unpacked introduced the Samsung Galaxy S6 as well as the Galaxy S6 Edge which comes with curved screens as well as other cool accessories like the Gear VR. The two new phones were announced by Samsung’s CEO J.K Shin who claimed that no other phone can match the new S6’s, and I have to say the phones have some pretty impressive specs. 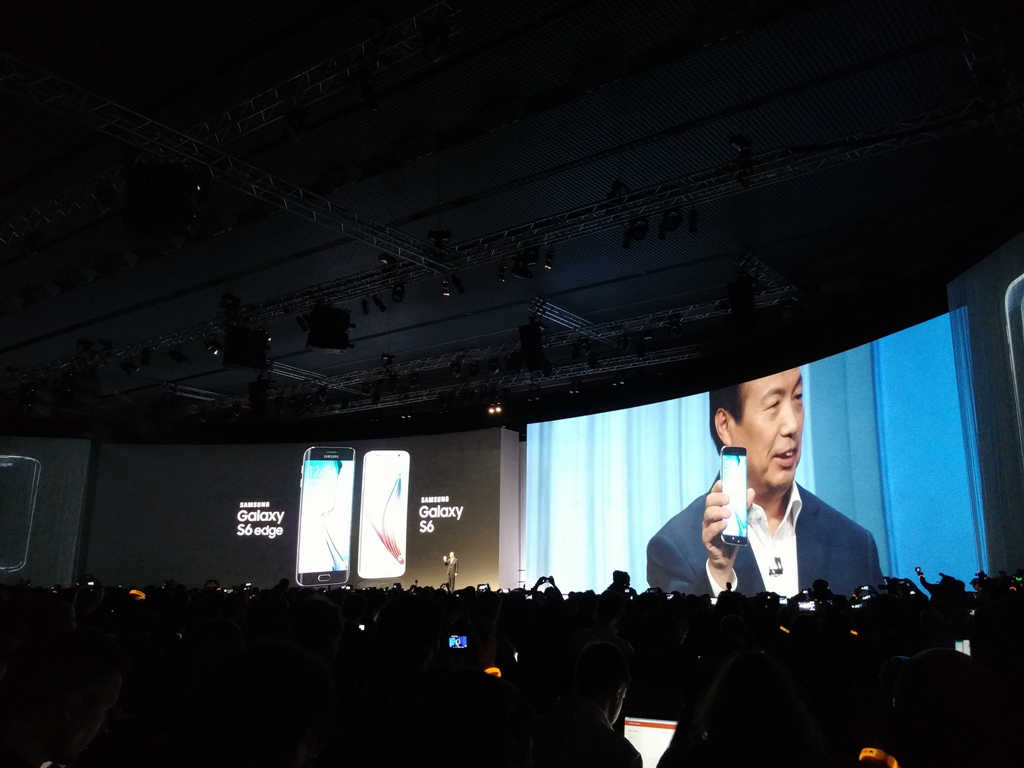 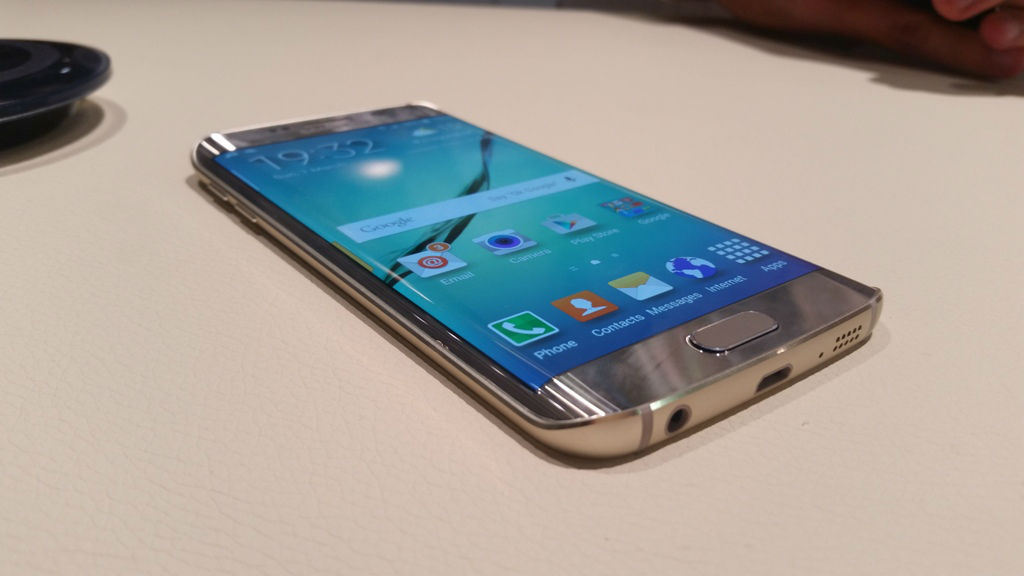 I will begin with the specs that are similar to both the S6 and S6 Edge:

1- Plastic covers were dropped and replaced by a metal frame and Gorilla glass back. The metal is supposedly 50% stronger metal than competing smartphones and shouldn’t bend 🙂
2- The battery is smaller and no longer removable (so no SD card slot). It should last longer however according to Samsung due to the new processor. 10 minutes of Fast Charging will allow you to use the phone for 4 hours. Both devices charge twice as fast as the iPhone6.
3- Display is 5.1″ Quad HD super AMOLED (577pi). Better colors more pixels and a gorgeous screen.
4- The processor (Quad 2.1GHz + Quad 1.5Ghz, Octacore ) is much better and uses less battery. The phones are equipped DDR4 3GB RAM.
5- The front camera is 5MP while the rear one is 16MP OIS equipped with f1.9 aperture for better low light results. Camera launch time is 0.7 seconds only. Here are some of the camera features: Quick Launch, Tracking AF, Auto Real-time HDR(Front & Rear) , F1.9, Low Light Video(Front & Rear), High Clear Zoom, IR Detect White Balance, Virtual Shot, Slow Motion, Fast Motion, Pro Mode, Selective Focus.
6- The #GalaxyS6 and #GalaxyS6edge come in five colors: White Pearl, Black Sapphire, Gold Platinum, Blue Topaz and Green Emerald.
7- Galaxy S6 comes in 32GB, 64GB and 128 GB, Galaxy S6 Edge in 64GB and 128GB.
8- There’s also Wireless charging which is a built-in feature.

As for the #GalaxyS6edge, it will be the world’s first dual-edge display smartphone, which means two curved side screens that will allow you to quickly check and answer call, messages or emails. The Clear View option will also allow you to determine who’s calling you based on the color . 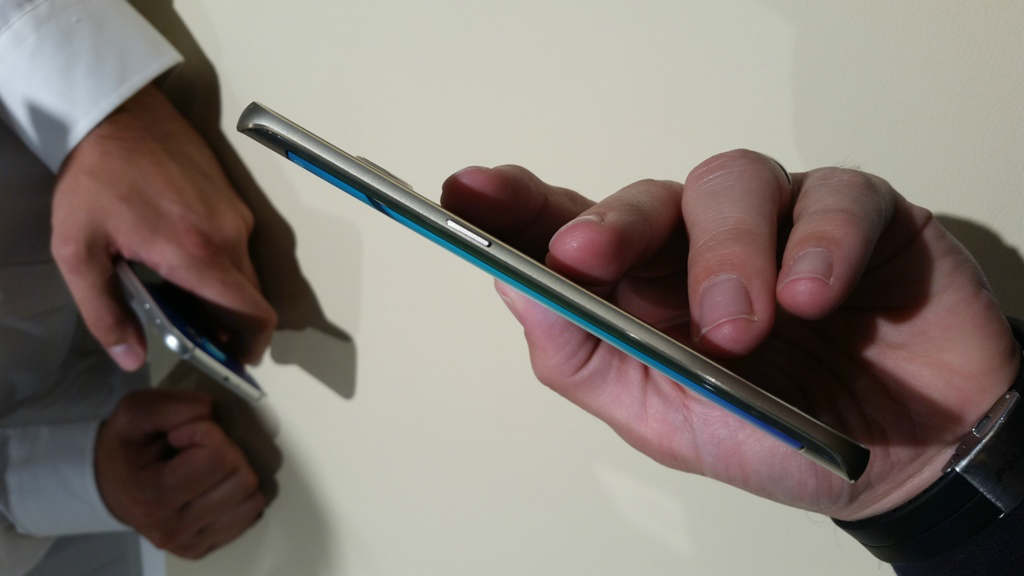 Once the event was done, we got the chance to check out the new phones and try them out for few minutes. I held both phones to see if they were comfortable to hold given their ultra-slim design and I was pleasantly surprised by their grip and feel specially the S6 Edge. The camera on both phones is fantastic, they are very quick and responsive and the side screens on the S6 Edge are very easy to use.

As a first impression, I liked the new S6 but I’m honestly in love with the S6 Edge. What I didn’t appreciate was the fact that there are no SD card slots anymore and I am curious to see if the battery life will indeed improve with the new processor as this is a crucial feature. Otherwise, S6 is a huge improvement from the S5 and the S6 Edge might be the next big thing. Of course this is a very quick first impression post and I will definitely write a longer and more detailed post once I get my hands on the phone for a proper review.

The official release date is set for April 10th and prices are not yet out but I heard the S6 will start selling at around 800$. Here are some of the pictures I took at #Unpacked 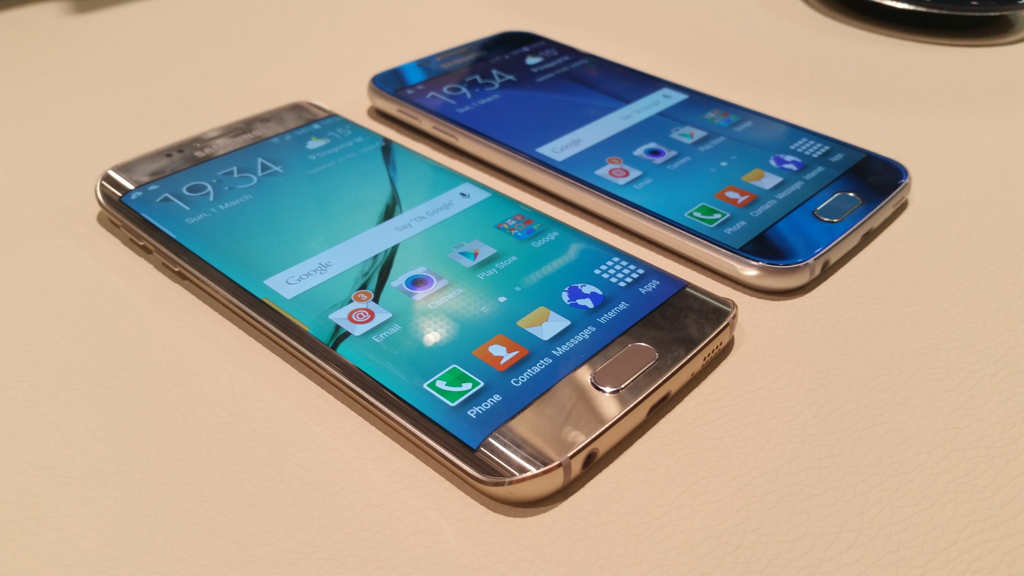 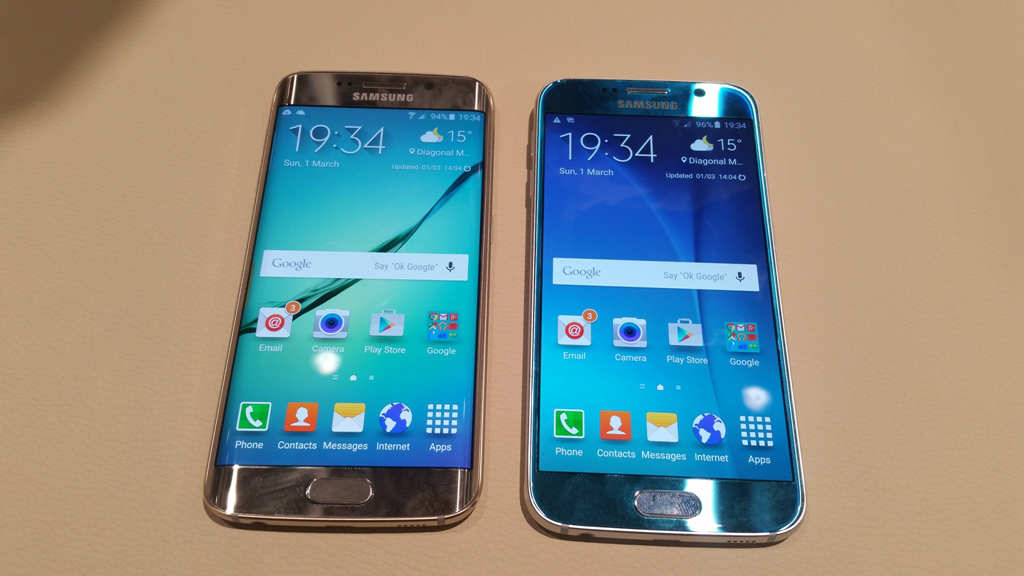 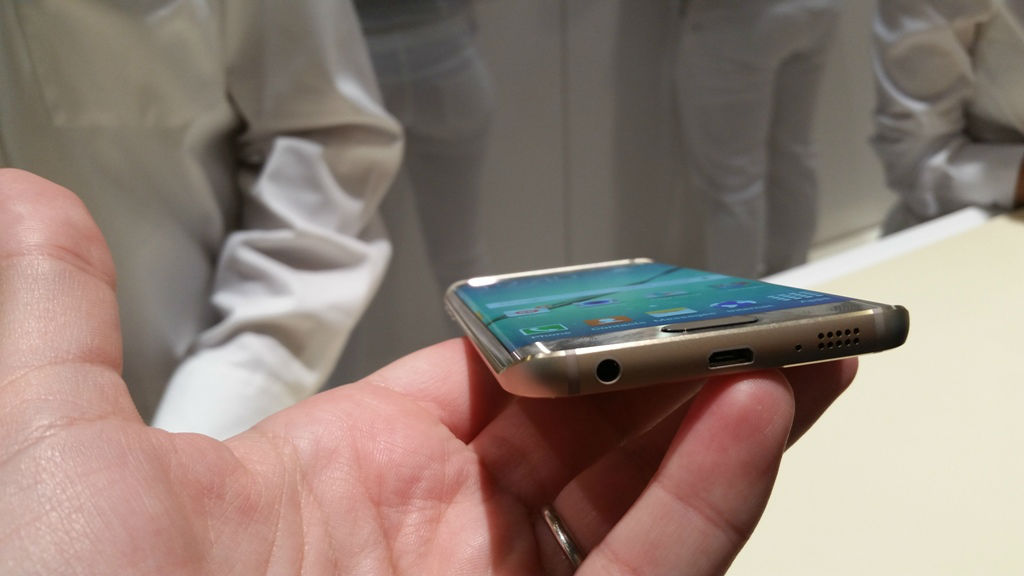 Here are a couple of pictures showing the Samsung Galaxy S5 and S6 side by side: 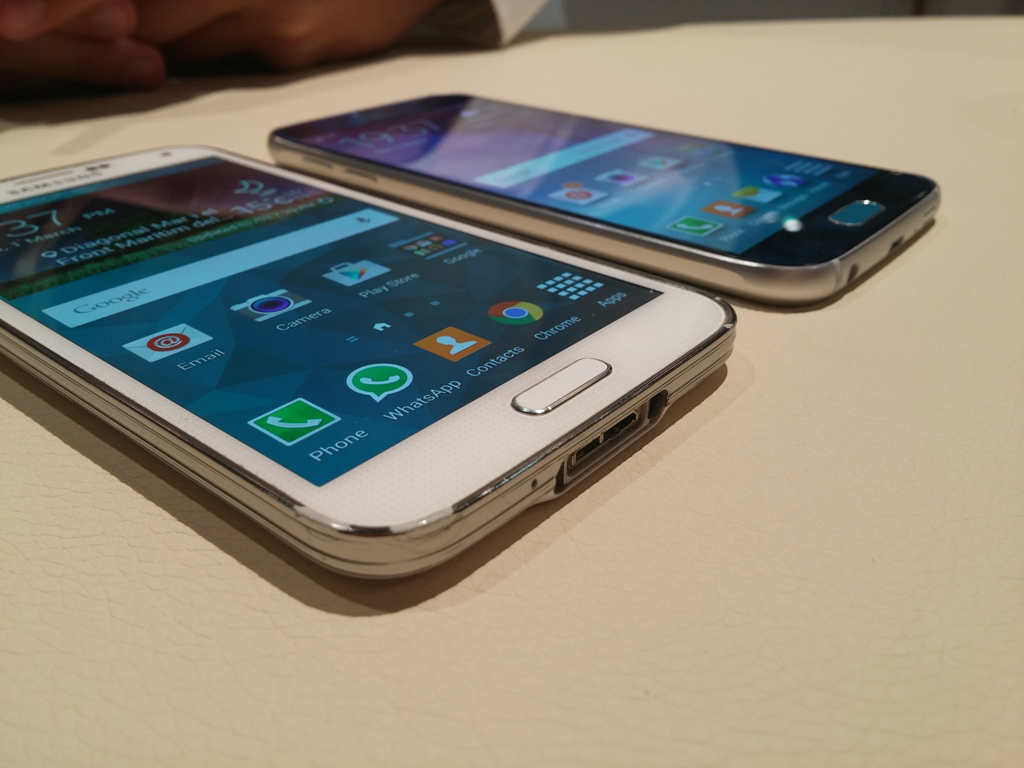 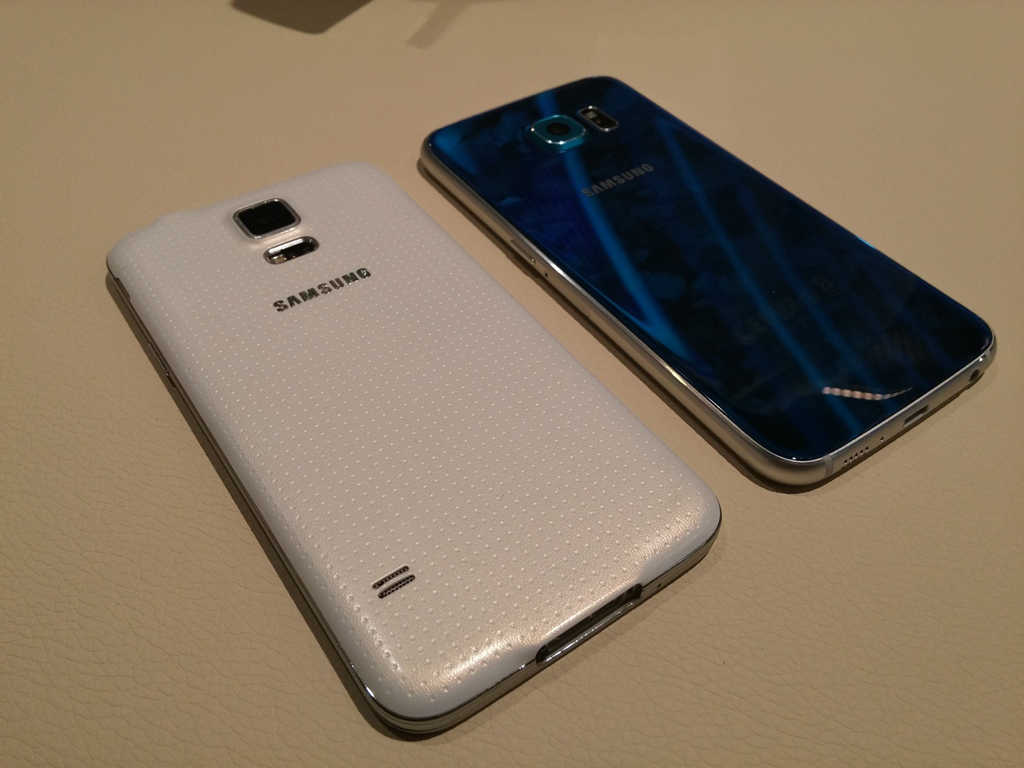