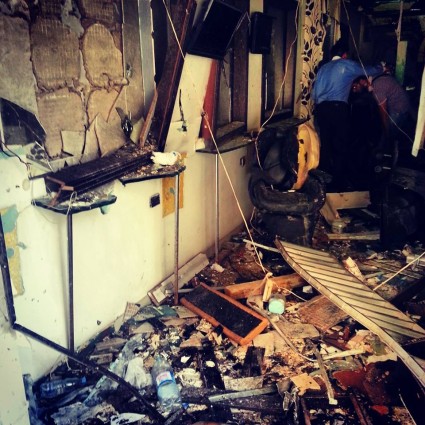 The last car bomb that took place in Beirut’s suburbs killed almost 30 people and injured hundreds. One of the injured happened to be a good friend of mine, who was getting a haircut when the car exploded few meters away from him. He had a near-death experience and got rescued by people he had never met before so I thought I share the story (after I got his approval) because it’s truly amazing.

Mohammad had just returned to Lebanon from a work trip and headed to a hair salon close to his place. On his way to the salon, he was chitchatting with a guy he had just met until each one of them went his way. Few minutes later, the explosion took place and here’s what happened:

When the blast happened, the whole shop was torn down (see picture above) and Mohammad was thrown away from his chair. As soon as everyone inside realized what happened, they found themselves trapped as fires were all around them. They started calling for help and as soon as they were spotted, few guys rushed to help them and break the wall on the opposite side of the hair salon to get them out before they suffocate to death. After several tries, everyone was brought out and my friend was taken on a scooter to the nearest hospital as it was impossible to get an ambulance anywhere near the site. He had bruises and cuts all over his body and needed more than 60 stitches (fortunately he had no burns).

He got out of the hospital two days ago but needs at least 3-4 weeks to recover fully. He learned later on that the guy he had just met on his way to get a haircut (They shared the same family name) had walked into a hair salon right next to his, and everyone inside that shop died instantly from the explosion.

Mohammad was “lucky” enough to survive this blast while 30 other innocent people got killed. Unfortunately, it doesn’t look like things are improving in Lebanon but one can always hope that these terrorists get arrested before it’s too late, and that all Lebanese work on keeping trouble away from Lebanon and not the other way around.

Until then, I hope you get better soon Mo and join us for a basketball game! 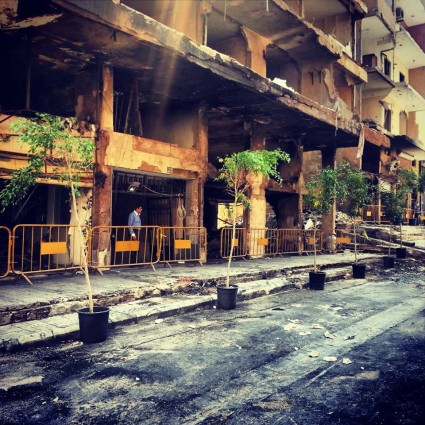 PS: Both Pictures were taken by Mohammad, who is a part time photographer.