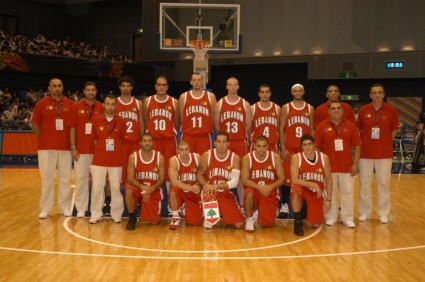 [Old Picture of the National team]

Some of you recall how I critisized that guy even before he was appointed and how terrible were our results because of his stupid tactics. [Link]

Back to Coach Sarkis, I never liked him and I think he only became famous because of Hekmeh’s achievements which were due to Elie Mechantaf (Estez el Riyadi) rather than his coaching skills. The positive side of the story is that we won’t have to pay him 100,000$ to screw us up like Baldwin did.

You ask me why I am always pessimistic about our national team, It’s mainly due of 3 issues:

– The players are never paid and treated like slaves. They have to show up or else be penalized, yet they are barely provided with transportation and training shoes. The federation and ministry of sports are to be blamed here.

– The coaches are never given time to prepare the team and never signed for 3 to 5 years. We expect miracle workers all the time. Most coaches we got were bad as well so it turned into a nightmare. The federation and ministry of sports are to be blamed here.

– Lebanese Coaches are paid ridiculous amounts compared to non-Lebanese ones, but at least they are paid something unlike the players. However, and here’s the worst part, our dear federation invests all its money every year to naturalize and pay for a Lebanese-American player and expects him to do wonders. As a result, other players not getting a penny feel insulted and disrespected and don’t give a damn about the team as a whole.