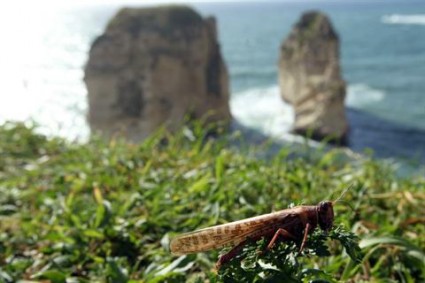 Insignificant Swarms of locust were spotted across Lebanon yesterday and caused a short-lived panic among the Lebanese. Based on what I know, locust can’t survive under low temperatures so there’s nothing to worry about. The Agriculture ministry also re-assured everyone that there’s nothing scary about this attack as the locusts “are not in their mature phase yet.”

The only deadly locust attack that Lebanon has ever witnessed was back in 1915, after Jamal Pasha had initiated a blockade of the entire Mediterranean coast to prevent supplies from reaching his opponents. Mount Lebanon suffered its worst famine and the locust invasion made things even worse and killed more than a quarter of the population. I tried looking for some pictures or a documentary but couldn’t find any. One of the best books though that describe this famine and the tough years Lebanon went through is Toufic Youssef Awwad’s Al Ragheef. It’s one of my favorite books and a must-read.

Here’s a nice report done by MTV on the locust:

* Title taken from one of Mustapha‘s tweets