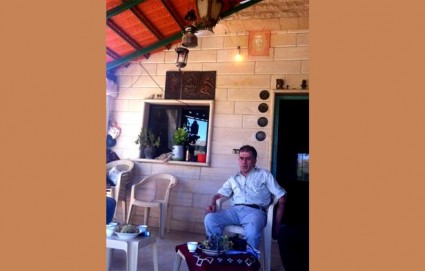 His real name is Mahmoud Hojeiry, he is a self-proclaimed communist since 1977 and has pictures of Che Guevara, Lebanese Communist Party leader George Hawi and former Lebanese Prime Minister Rafiq Hariri. Moreover, he took the pilgrimage to Mecca back when Reagan was president and was given the nickname Hajj Reagan since then.

A communist who goes on pilgrimage is nicknamed Hajj Reagan. Welcome to Lebanon, land of contradictions.

He might be a hajj – a name given to Muslims after they take the pilgrimage to the holy city of Mecca – but the 50-year-old man is not what you’d call a typical Muslim. Hajj Reagan has been a self-proclaimed communist since 1977, when he was 14 years old. And, his house is a statement of his political ideas. Che Guevara’s portrait sits atop the entrance to Hajj Reagan’s house. He also owns a small bronze statue of Soviet leader Vladimir Ilyich Lenin, former Egyptian president Gamal Abdel Nasser, and portraits of Lebanese Communist Party leader George Hawi, Druze leader Kamal Jumblatt, Palestinian leader Yasser Arafat, and former Lebanese Prime Minister Rafiq Hariri. [Link]