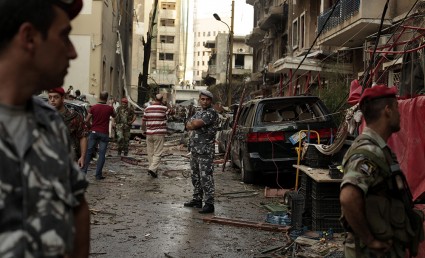 Picture from the WashingtonPost

On October 19, I woke up and drove to work in Achrafieh. Around noon, I called a friend to see if we can meet up for a coffee at Starbucks Achrafieh and we agreed to meet there at 1:30. Around 1:25, I remembered I had an important conference call and pushed our meeting an hour. An hour after, I had to cancel our appointment as I got caught up at work. At 2:50 pm, a bomb went off near Sassine square killing 4 people, among them Wissam el Hassan and his bodyguard, and injuring over 90 people. To sum it up, I could have got killed that day. Thank God I had work to do!

I hope you did not buy my story because it’s total B.S and I was being sarcastic even though I was planning to go to Sassine that day and was passing by that same exact street.

The reason why I am writing this is because some celebrities in Lebanon want us to believe they had a near-death experience on that day because they were simply passing by Achrafieh or by that street, as if Achrafieh is a small town with two main streets only.

One of them is Ragheb Alameh who apparently was on his way to the studio on that day and got there before the bomb came off, probably just like few thousand other Lebanese who take that street everyday. Another is Comedian Michel Abou Sleiman who had to go to some nearby studio but made a few stops before. [Link]

I am not saying they shouldn’t feel lucky not to have passed by that street at the time of the blast, or near it, but there’s no need to make a big deal out of it, specially that a zillion other Lebanese cross that street on a daily basis. Added to that, over 60 families became homeless after the blast and I have yet to see any of our Lebanese celebrities visiting the victims or helping them. Instead they are sending tweets denouncing the killings and showing support (Wen byoserfouwa hay?).