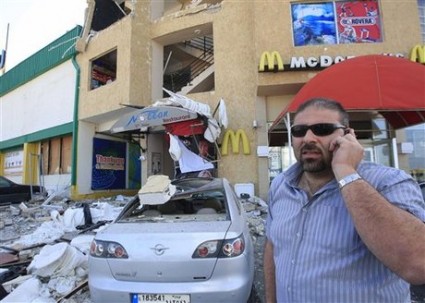 Zahi Zeidan vows he won’t back down as he stands in his bomb-shattered restaurant and oversees workers carrying debris out of dining rooms where on a good night patrons are usually drinking and dancing.

“They targeted us because we serve alcohol,” said Zeidan. “Selling alcohol is my right. This is my country and I will not accept that people dictate to me what I work.” [Source]

This is the 4th time a restaurant is targeted in Tyr for serving alcohol. I must admit you have to admire this guy’s commitment to serving alcohol despite all those bombings. I think we should organize a trip to Tyr in support of Zahi Zeidan. Who’s in?

On a different note, it is quite astonishing how police investigations have not led to any results yet, especially in a city like Tyr where Nabih
Berri, the speaker of the parliament, displays considerable influence.

Last but not least, is it so hard to dispatch few army men or municipality policemen to guard those places temporarily until the criminals are caught?