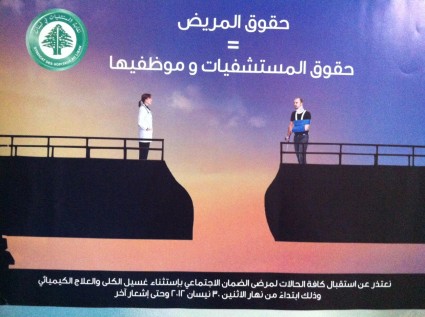 The hospitals, their staff and doctors went on the one-week strike to protest the NSSF’s delay in reimbursing hospital bills and its refusal to increase the fees of physicians. The head of the Syndicate of Private Hospitals Suleiman Haroun told Free Lebanon Radio, that the hospitals will only admit patients with severe hemorrhage, those who have heart and respiratory problems and who undergo dialysis, and victims of traffic accidents. [Naharnet]

This is a very serious matter that needs to be treated ASAP as there’s a great majority of Lebanese who rely on the NSSF to hospitalize themselves, their family and more importantly their elderly. However, I can’t really blame the hospitals for taking such measures as they can’t keep working for free and enduring losses.

One solution is to get insured somewhere else, but most insurances don’t cover people over a certain age and not all Lebanese families can afford paying for an insurance.

I have to ask the government here which is more important: Paying a minister 400 million dollars to compensate the closure of his stone-crushing plant or reimburse hospitals to end this strike?

See Also:For Those Wondering About That White Smoke Coming Out From Marina Dbayyeh
Posted By Najib
Categories CRITIQUES,INFORMATION,LEBANON