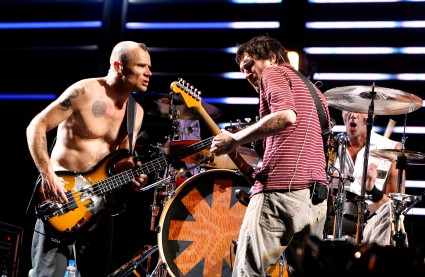 The Red Hot Chili Peppers have been urged to abandon a planned gig in Israel, after it emerged that they performed at a pro-Palestinian gig that raised over US$500,000. The superstar band, who have won seven Grammy Awards and sold over 65 million albums worldwide, are due to perform in Tel Aviv on September 10, days after gigs in Beirut and Istanbul. [Link]

Here’s an excerpt of the letter:

Open letter from Lebanon to the Red Hot Chili Peppers: â€œCome to Lebanon, but not to Israel: Until All Palestinians Have the Right of Return”

Last November you played at a benefit for Palestinian refugee children at Cafe de Paris in London. Your decision to support Palestinian refugees must have come from an understanding that for 64 years Palestinians have been denied the right to return to their land and to be compensated for loss incurred by the Zionist colonization of their land. Fighting for the implementation of this right is the central tenet of the Palestinian Boycott National Committee and the Palestinian Campaign for the Academic and Cultural Boycott of Israel (PACBI). As a result, we find it strange that less than a month after your benefit concert you announced your decision to play in Israel.

There’s nothing strange about this decision. They are not politically affiliated yet wouldn’t mind promoting causes if asked to. How hard is that to understand?

Lara Fabian cancelled her concert back in February in Lebanon after receiving a similar letter. [Link]

At this rate, we will only be allowed to watch U2, Gorillaz and Roger Waters performing in Lebanon. Isn’t Wiz Khalifa performing soon in Lebanon? Hasn’t he been to “Israel” yet? How about Charles Aznavour? Chris de Burgh? The Cranberries? Tom Jones? Shakira?

When are we going to stop this nonsense? Should we label the Lebanese who attend those concerts as traitors or collaborators as well?