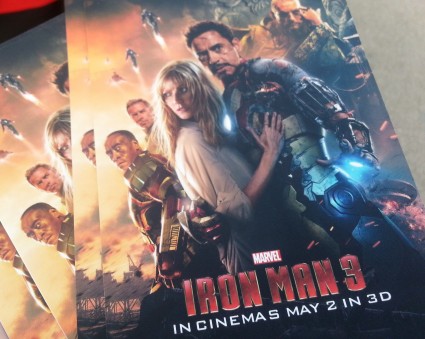 Iron Man 3 was definitely a major improvement from Iron Man 2 but the first Iron Man is still my favorite by far. In fact, IM3 was fun to watch with a lot of explosions, chases, a very menacing villain (at least at first) and Robert Downey Jr played his role to perfection, but there are few things I didn’t appreciate.

– The trailer built up a bad guy, The Mandarin, as terrifying as Batman’s Bane or Bond’s Javier Bardem but the way he gets caught and who he turns out to be were quite disappointing.

– I don’t think the little boy character was needed in the movie. This part disconnected us from the action and didn’t last long enough to draw us further into the story. To be honest, I thought the whole movie wasn’t very well paced.

– There’s a lot of humor in the movie, a bit too much in my opinion.

Otherwise, Gwyneth Paltrow was great as always and Happy Hogan was hilarious and like I said previously, it’s a lot of fun and is a must-watch. What remains to be seen if it will be the last time we see Robert Downey Jr. as the Iron Man or not.

PS: The movie was in 3D, which I still think sucks in theaters.