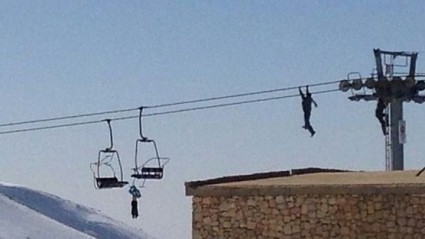 Remember the rescue story I posted about two days ago? Well the petition the 9-year old’s mother started, asking for enhanced safety at the Faraya-Mzaar ski slopes, has gone viral and reached over 2500 signatures in a couple of days.

However looking back at the incident and Pamela’s comment below (Pamela is an experienced Ski Instructor), I have to agree and say that part of the blame is on the instructor and the ski school behind him as he shouldn’t have left the kid alone.

I hope the people in charge of the Kfardebian ski slopes, as well as other ski slopes, take these comments into consideration and have few guidelines and prerequisites for ski instructors.

First of all hamdella 3a Salemto and he was lucky indeed!
But I disagree with u regarding blaming faraya mzaar only! I used to be a ski instructor for many years, and was licensed by the lebanese ski federation after undergoing extensive training’ and tests done by international committees. Every respectful and professional ski school SHOULD make sure its ski instructors go through this process before handing them any child since it is a great responsibility. What i’m trying to say here is that I believe the accident was first and foremost the instructor’s fault who should have trained your son to take the ski lift alone before allowing him to do so! And assuming your son just got in line before the instructor could stop him, he should have at least notified the person at the ski lift about the problem to inform the other guy at the end to help your son.
This is an unacceptable mistake, and I believe in this case Faraya mzaar should conduct routine training and testing to ANY ski instructor ; not anyone who knows how to ski well is qualified to be a ski instructor especially for young kids
I agree that there should be a “pisteur” at every slope, but that is secondary to the instructor’s role

Every year similar accidents happen and some less fortunate kids have actually fallen off the ski lift and broken their tiny bones because there are “dkekeen ski schools” with amateur ski instructors with only monetary purposes!!!