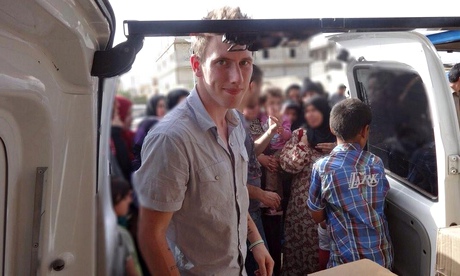 That’s just terrible news! I was really hoping that Peter Kassig would be released soon. I’ve been following up on Kassig’s story for quite some time and this man has done a tremendous job in helping refugees specially in Lebanon.

He came to Beirut in the spring of 2012 and decided to stay here and help out the Syrian refugees. He was only 24 when he founded the humanitarian group Sera (Special Emergency Response and Assistance), aimed at providing medical training, supplies and treatment in areas too difficult for other humanitarian organizations to operate in. He also changed his name from Peter to Abdul Rahman. I remember reading about Abdul Rahman on the Lebanese blog Hummusforthought who was a friend of his before he got captured in October 2013.

His humanitarian work made headlines all over the world, but it wasn’t enough for IS to free him. Here’s an excerpt from the letter he wrote to his parents while in captivity:

“I am obviously pretty scared to die…I am very sad that all this has happened and for what all of you back home are going through,” Kassig wrote in the letter. “If I do die, I figure that at least you and I can seek refuge and comfort in knowing that I went out as a result of trying to alleviate suffering and helping those in need.”