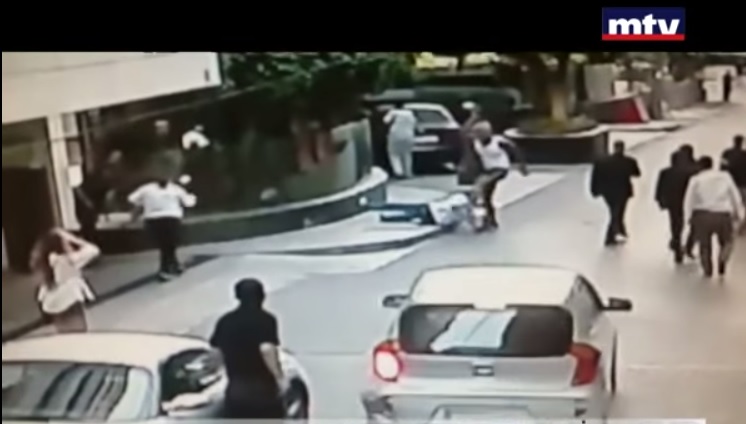 Update: There’s an online campaign to help support George’s family financially. You can help out [here].

George Al-Rif is a 45 year old man who got into a dispute over right of way on the airport road and was chasing the car that hit him to report it to the police. Unfortunately, as soon as they got to Achrafieh, the other driver, a guy called Tareq Yatim, went down and started beating and stabbing George. George was critically injured before dying of his wounds in the hospital. The victim had four children. A video emerged showing the attack and the least I can say is that it’s quite shocking. Yatim, who was arrested later on and confessed to the attack, just stood there beating and stabbing the guy in broad daylight in the middle of the street.

What’s even more shocking is that the murderer did not hesitate to kill his victim over the silliest of disputes, and what some media reports stated that “he was under the influence of drugs” is quite pathetic and misleading. Nothing justifies stabbing and killing a man like that and the sad part is that there are tons of people like Yatim out there who are “well protected” and would kill or assault other people over the silliest of reasons.

This is exactly why I don’t get into a fight with anyone on the road because there are sickos out there waiting for a chance to empty their gun or use their knife. Sadly enough, staying away from fights could also get you killed in Lebanon, just like Walid el Mohtar, a Lebanese who was shot dead by mistake yesterday just because he was at the wrong place at the wrong time.

This is the jungle we live in and the worst thing we could possibly do is turn it into a religious matter because people like Yatim are animals on the loose and know no religion or law. Only few days ago, some website was bragging about two young Lebanese “Christians” beating a Lebanese “Shiite” in broad daylight because he insulted the cross at the heart of Jounieh. Gladly the incident was a minor one but I thought the way the story was reported was terrible and that we should not incite to violence or sectarianism under any circumstances. As long as we are capable of containing the situation and calling the cops to do their job, we should avoid resorting to violence.

George Al-Rif and Walid el Mohtar unfortunately died and no amount of justice will bring them back to their family. I just hope that their killers will rot in jail and won’t be able to get out anytime soon because of the “wastas”. Until then, I ask you to stay away from fights and avoid any kind of dispute on the road or on the street because you might end up facing a cold-blooded killer like Yatim. Some people might say that keeping a gun or a knife in your car is a must in this country, I say that it makes things even worse for everyone. Keep your weapons at home and stay away from fights on the street. If you ever face someone like Yatim, run him over or just drive away and if he’s chasing you down, drive to the nearest police station, that’s what I would do.