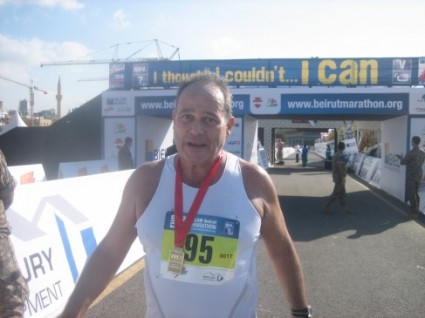 After reading his story, I was truly impressed by the amount of courage, determination and strength this man has! I hope I will get the opportunity to meet him one day. A true inspiration for all of us.

Diagnosed with prostate cancer, followed with osteoporosis what is left from the life of man with no testosterone and very weak ligaments? Nothing but life, for this story is not about a runner, but a master mind of managing pain. You would normally pity a person with advanced cancer eating his cells up, but I envied this man with the golden will that defeated his own biology.

“I am not a runner” says the man behind this miraculous strength, “I tried to be a runner, but my biology failed me, however my mind power never did”.

Not a runner? Maybe, but an athlete for certain.

Founder of Lebanese kick boxing Union in 1996 his members were competing globally, however they didn’t have enough sponsorship, a fact that drove Mr. Najjar to abandon his own foundation. 11 years later, after having no contact with his members -who remained enrolled in his foundation- a trophy was delivered to his own house, along with a message saying “Sports have lost Kamal Najjar”. Everyone missed the mind of a powerful being, and no one forgot his presence. It is of no surprise for no one forgets a spirit blooming with authenticity and light!

From kick boxing, to karate, to running, Mr. Najjar’s heart never skipped a beat, he was however, delayed for while when diagnosed with prostate cancer and severe back problems. Sports did try to lose Kamal Najjar, but he made it very hard on Sports. Mr. Najjar faced all hardships and all types of loss with hope strongly planted in his heart, and this time good conquered evil. After complete paralysis and numerous operations, he walked again, and as soon as he did, he resumed training. “I trained religiously, started by walking 60 min 3 times a day, increased gradually into walking 120 min 3 times a day, and lost 10kg in 5 weeks. I only ate vegetables and I did it on my own”.

He did it; Mr. Najjar disciplined his own body, outsmarted his own mind, and tricked his own time. Who can buy some time? Apparently Mr. Najjar can, for his mind was much stronger than his body.

Running one day, Mr. Najjar noticed that his sneakers were hurting his toes, but it was not the sneakers causing him pain, but his toes and they had to come off.

A participant in the Beirut Marathon since year 2008, Mr. Najjar overcame all distractions that kept him from reaching his goal. Prostate cancer, back problems, hammertoes operation, and this year he will be participating in the 10 k race!

“One of the most important reasons I adopted this sport is in order to build a stubborn body and resistance, and what I was mostly looking forward to is not just the race, but the training I had to undergo in order to walk all this distance, for the continuity of this effort means that cancer is defeated”.

Scientists haven’t found a cure for cancer yet, but Mr. Kamal Najjar has.