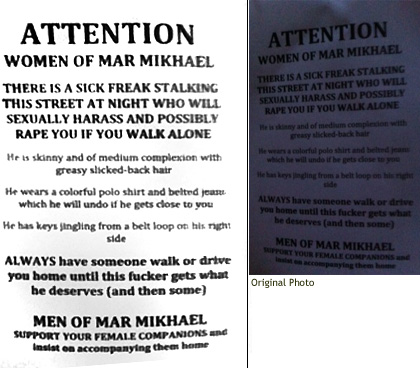 Apparently there’s some guy roaming around the Mar Mikhail street sexually harassing women at night. As recommended by the poster, always have someone walk or drive you home not just in Mar Mikhail but almost everywhere you go these days.

“It was Friday night and I just finished work. It was 2:30 a.m. and I was walking home, which is in Geitawi…As I was going up the Armenian stairs, a guy stopped in front of me and asked me where Gemmayze was. I pointed him out in the right direction. He then asked me, ‘Where are you going?’ At this point, I decided I wasn’t going to speak to him [and kept going up the stairs.] He was walking along side, muttering to himself. Then he cut me off at the top of the stairs and asked, ‘Sex?’ and mimed a blow job, before undoing his pants. So I backed away and started screaming at him, saying, ‘Haram, khalas, and get away from me.’ After that he ran down the stairs.”

She said no one came to her aid after she started screaming.

She also told NOW that “I didn’t want to go to the police; they won’t do anything. But I wanted people to know about this and I wanted the guy to be caught. [Link]”