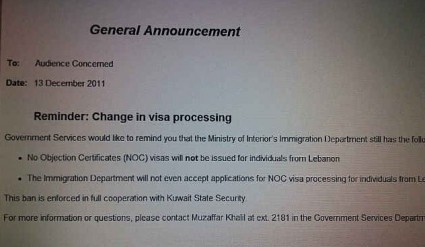 I read on JadAoun’s blog yesterday that Kuwait has officially banned all work permits for Lebanese and that other GCC countries will follow suit.

I don’t know what’s the reason behind such a decision, but I assume it has to do with Lebanese engaging in politics, especially after what happened in Bahrain. This decision, if followed by other GCC countries, will have serious economic repercussions on Lebanon as unemployment is already on the rise.