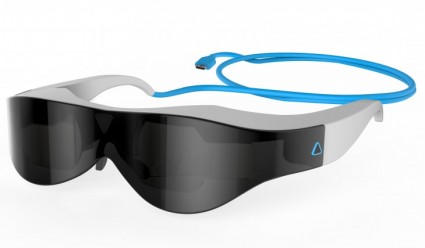 You can check out a demo [Here].

Move over, Google Glass. A Lebanese entrepreneur and his cofounder have just debuted a pair of wearable glasses that displays augmented reality in three dimensions as opposed to Google’s two.

The glasses, built by Soulaiman Itani and Allen Yang at Atheer Labs in Mountain View, bring fantasies to life, allowing wearers to exercise with virtual targets, conduct conferences calls while browsing data online, and play three dimensional games, thanks to hand sensors and an advanced algorithm.

Those who were wowed by Pranav Mistry’s TED Talk about Sixth Sense technology will likely go gaga for Atheer, which also offers a 65 degree field of view as opposed to Google’s 12 degree frame in the corner of one’s view.

Today, it’s available on Indiegogo, for only $350; all it’s missing is precognition.

With a lightweight design and integration with Android such that it runs any and all Android apps, the glasses are designed for the everyman, founder and CEO Itani explains. While Google’s SDK allows developers to build apps for Google Glass, Atheer allows the million or so existing Android apps to function already within its platform, without any further work. Yet the company also has a custom-built SDK for those Android developers who do want to take advantage of its 3D functions. This, Itani explains, allow users to create virtual objects that they can leave in their environment or send to another location. [Source]