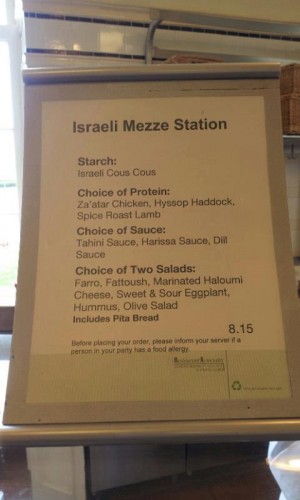 You can’t mess with the Lebanese when it comes to food. After almost 20 days of her original post, Harvard apologized to Sara and agreed on naming it a “Middle Eastern buffet”. When reading this story, I remembered the hilarious video I posted exactly two years ago about Lebanese vs. Israeli hummus.

Here’s the story as told by Sara on her Facebook page.

On October 28th in the year of our lord 2012, I posted a post about an Israeli Mezze Station Menu at the Harvard Business School dining room that I was not very happy about. The menu featured a wide array of typical Arabic and Mediterranean dishes, which as far as we’re all concerned should not be called Israeli the same way I cannot be called Israeli. It turns out I wasn’t the only one who felt unhappy about the false content of the menu… Within five days of my posting, the “shares” had climbed from 1 to 1,000 (with my knowledge of mathematics, that’s a whole increase of 000.) Then, literally overnight, the shares doubled to 2,000. Then kept climbing over the next week to 3,400+, all the while being accompanied by a generous 4,700+ likes and 270+ beautiful comments (we’ll define beautiful later).

Without me having to exert much effort, it was the virulence of your likes and shares, as well as the respectful way that everybody connected with their humor and frustration, that has caught the attention of the key people. Last week, I received an official, gracious response from Harvard Business School through Mr. Brian Kenny, Chief Marketing and Communications Officer at HBS less than 24 hours after reaching out to them. He has kindly requested I share with you his response on behalf of Dean Nohria and Harvard Business School:

“As you can imagine we’ve been following the responses to your post since it first went up last week. [..] [our] response is essentially a mea culpa on the part of the school. Clearly we didn’t do enough to verify the the accuracy of the Israeli Mezze station menu. You correctly called us on it and struck a chord with thousands of others in the process. The fact that we offended people is deeply troubling, particularly considering that our reason for having the international buffets each day is to celebrate cultural diversity. We take such things very seriously. From the moment we first saw your post we began having extensive conversations internally and with Restaurant Associates to understand why this happened and how we can prevent it from happening again.”

To which I answered:

“Dear Mr. Kenny,
I appreciate the time and effort you took to understand and commiserate with us about the sensitivity of this issue. Naturally, I knew that HBS would react properly, which maybe lets us see that we Arabs (even the more educated–Harvard Arabs) may be placing too hard of a stigma on American biased responses when it comes to Israel. […] While my Arab colleagues’ pessimism concerning evenhanded American responses is not founded on illusion (we have tons of history to prove American bias), your response has proven that it is still worth reaching out when we feel trampled on. […] So thank you for that, this will bring relief to many.
Since your comment is positive, if you don’t mind, I will post it on my facebook wall, as I am writing a follow-up answer to the commotion that was caused. Do you mind?
Thank you again for your response. I look forward to posting a picture on my wall of an HBS authentic Arabic [sic. Middle Eastern] Mezze station, I think this will assuage everybody who feel they have been deprived of their identity. And kindly let me know when you do so, it would be an amazing response from HBS.”

To which he graciously responded:

“[…] Please do feel free to post my response on your page. […] We truly understand the reaction and the sensitivities of the Arab community. […] In the meantime, RA [Restaurant Associates, the catering company] asked me if they could post their own apology. They dont want to offend further but they would like people to know how sorry they are. […] As for the Arabic Mezze station, I will have them get to work on that right away.”