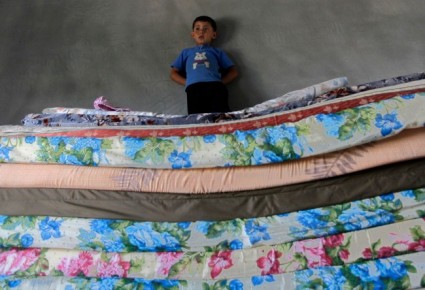 Picture from the Atlantic

Most of the Landlords and real estate companies are trying to rip us off Lebanese with their prices so it’s no surprise to find them trying to rip off Syrian refugees.

“The landlord is not a good man,” he says cautiously as the smile he wore just a minute earlier fades. “He’s greedy, and he’s become greedier since the rest of my family arrived.”

“Most of the stories we get include refugees renting out a room or sometimes a small piece of land, mainly in the Bekaa [near the Syrian border] and are having to pay a lot of money,” said Joelle Eid, a Public Information Associate at UNHCR.

Hassan, who asked his last name not be used for fear of retribution, says the landlord, an overweight local sheikh in his 50s, used to charge around $67 each month for a room. Mohammad, a 23-year-old refugee from Idlib, lives in a one-room apartment with three family members in Faraya, north of Beirut. He pays around $135 a month for what he describes as a broken down apartment where nothing works properly. He also says that his family is being charged more for the room than his Lebanese neighbors are for their homes. [Link]