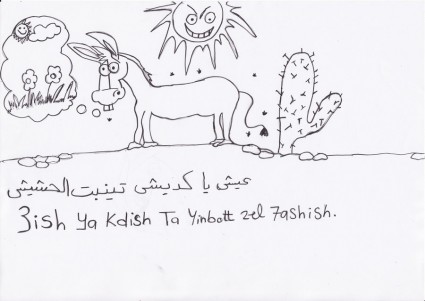 There are lots of Lebanese proverbs and sayings that are funny and meaningful, but this one I believe should be taken out of our dictionary. I hear it mostly from elderly people or even parents and it is used whenever someone does something that is not expected of him or something extraordinary, like for example if a lazy son starts studying and getting good grades, or if he offers help for no reason, parents would go “Chou sayir ma3ak 3am tedrouss? Baddo yimout yahoude …”

“Baddo yimout yahoude” translates to “A Jew is gonna die”, and basically means that a great dramatic event just happened just like when a Jew dies, but honestly I don’t get it. I think it’s an anti-Jewish saying that we should get rid of.

Note: I changed Anti-Semitic to Anti-Jewish as there’s some controversy over the use of that term and whether it’s directed against Jews only or Semite people in general.