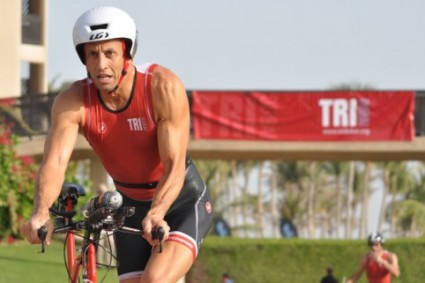 Roy Nasr was a former Arab Triathlon champion and finished an impressive third at the 2011 World Triathlon Championships in Beijing. He also co-founded Tri Dubai and was training for Ironman South Africa in April 2014.

What an unfortunate loss. May he rest in peace and sincere condolences to his family.

Former Arab triathlon champion Roy Nasr was killed while another was injured when a drunk driver hit them as they were cycling early on Friday morning near Safa Park interchange, Gulf News has learnt.

Nasr, 49, and a cycling friend whose name was not immediately available, were hit from behind by a car when the drunk driver swerved past the cyclists’ escort vehicle as they pedalled towards Meydan, said a senior police official.

Major General Mohammad Saif Al Zafein, Chief of Dubai Police Traffic Department, said the driver, who was under the influence of alcohol, rammed into the hapless victims. “A cyclist was killed after he was hit by a car on the Safa Park bridge early morning and another cyclist was also injured in the accident and was rushed to hospital,” said Maj Gen Al Zafein.

Police arrested the driver and a case will be transferred to Traffic Public Prosecution. According to initial reports, the accident occurred around 5:30am near Safa Park while the cyclists were crossing over to Shaikh Zayed Road. [Link]