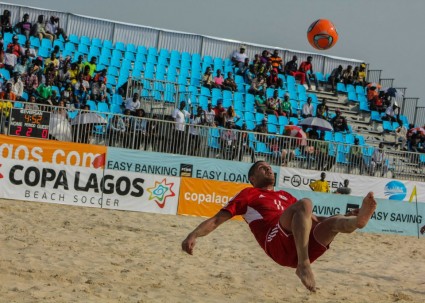 Lebanon is the first team from the Middle East to take part in the Copa Lagos cup and has already made his presence felt by defeating 6-times Beach Soccer European Champions Portugal 5-4. Lebanon had lost its opening game to hosts Nigeria 7-6.

As stated in Copa Lagos’ website, Lebanon is an emerging force in Beach Soccer as they finished 4th at the Asian games in June 2012 and topped the qualifying group by winning all 3 games, including an impressive 8-3 victory over the UAE. 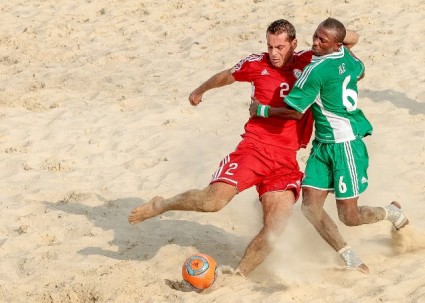 For those of you who don’t know about Copa Lagos, here’s a brief overview:

Copa Lagos Beach Soccer, is the first ever international beach soccer event to take place in Nigeria and in all Sub-Saharan Africa.

Founded in 2011, Copa Lagos is organised under the scope of Beach Soccer Worldwide (BSWW) World Tour and will take place every year in December, in Lagos, Nigeria. The competition is played in a Round-Robin format (League Format), allowing in this way the opportunity for each team to prove themselves against all participants during three days of competition.

Copa Lagos is broadcasted in 21 international channels (Eurosport, Al-Jazeera, Globo, ESPN, Sky Sport, Canal Plus, FOX Sports, Supersport, among others) and in one national partner channel AIT (African Independent Television). Copa Lagos also aims to have a strategic role in development of beach soccer in Nigeria. In this context each edition of the competition will offer Beach Soccer Clinics and certified Refereeing and Coaching workshops.

You can check out more pictures of both games [Here] and [Here].