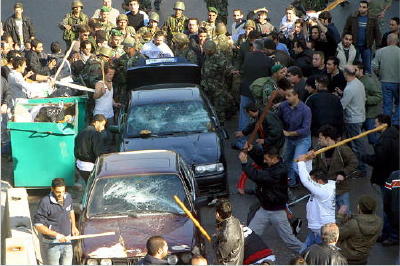 Two people were wounded and 15 vehicles damaged Tuesday evening when a family dispute between two brothers erupted into gunfire in the Beirut southern suburb of Ghobeiri, the state-run National News
Agency reported.
After the dispute, one of the brothers, armed with a machinegun, went out into the street, starting a shooting spree that left two people wounded, one of them Sudanese, and 15 vehicles damaged. [Naharnet]

Imagine it on a bigger scale and you have an idea of what might be happening anyday anytime now according to what some predict.

The funny part is that no one was arrested because the shooter suffers from a mental disorder. (ma hek?)